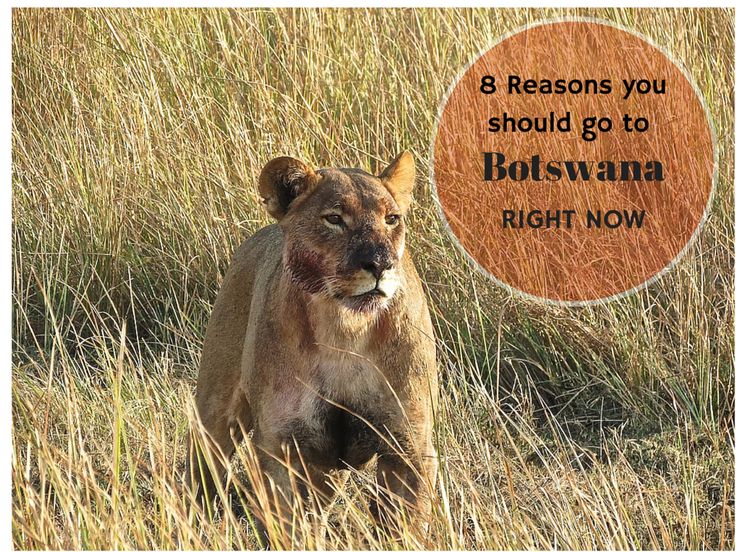 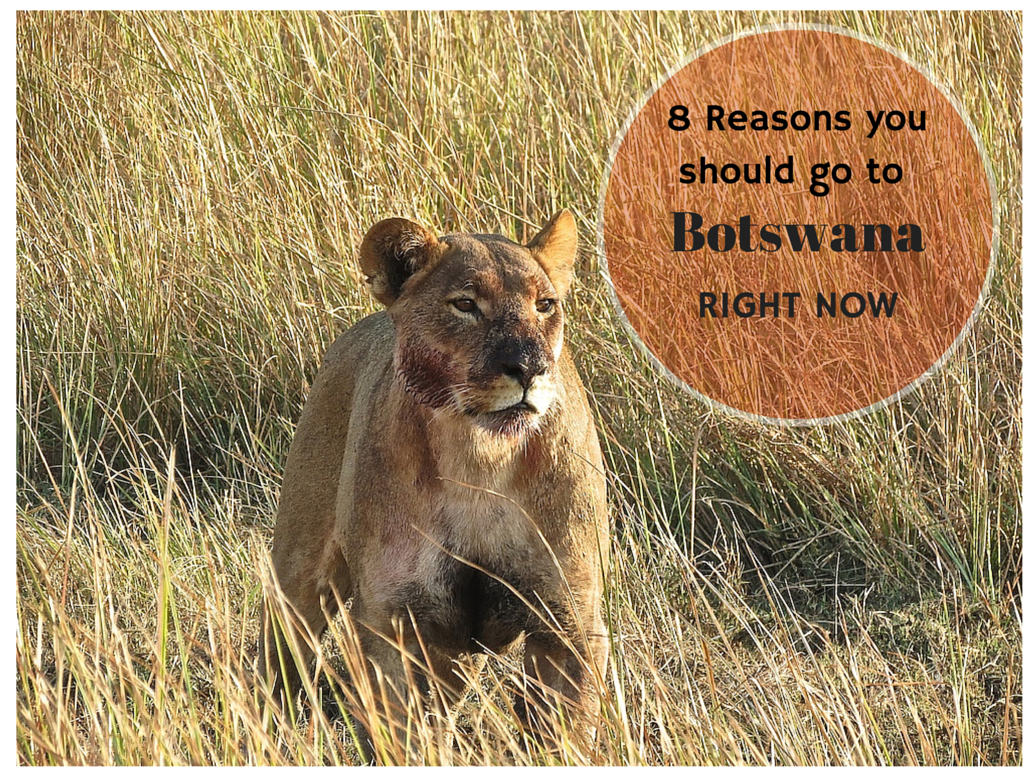 As we barreled along Namibia’s long, smooth roads amidst a vast, great desert, we set our sites on a more lush land, one full of exotic creatures and friendly people, a place where the sunset blazes red in the sky and the ground quakes from elephants thundering by.  We were heading for Botswana.

“The police will chop off your hands if you get caught stealing in Botswana. It’s zero tolerance. There’s no crime there,” our guide stated very matter-of-factly. “It’s the safest country in Africa.”

Even if the first point was an exaggeration, I know the rest to be true. Botswana is one of, if not the safest country in Africa, in terms of crime and violence.

The country has poured plenty of resources into tourism as it becomes increasingly important to their local economy (~12% GDP), and it certainly shows. With smooth, paved roads and national parks packed with animals, Botswana has become the go-to safari destination, often replacing Kenya, Tanzania and even South Africa as a visitor’s first choice. As a traveler who has “safaried” in all four countries, I concur with the masses. Botswana might just be the best…

There are many reasons you should bump Botswana to the top of your travel list. Here are 8 of them:

If you’re traveling alone or with kids and you’re looking for a safe country in Africa, Botswana is your place. It’s probably safer than many places in the U.S. Botswana is ranked #2 of 52 African countries on IIAG for safety and rule of law, second only to Mauritius.

One of the seven natural wonders of Africa, the Okavango Delta, once an ancient lake, is now a marshland with a smattering of fascinating islands crawling (literally) with wildlife. Camping on one of these islands is truly a unique and fascinating experience. The government works with private tour operators to efficiently manage the natural areas, ensuring conservation of the ecosystem as well as growth of local economy. The Okavango Delta website lists some options for visiting, both camping and nicer B&B type arrangements.

One of my favorite all-time experiences, camping on an island in the Okavango Delta requires transport by canoe. 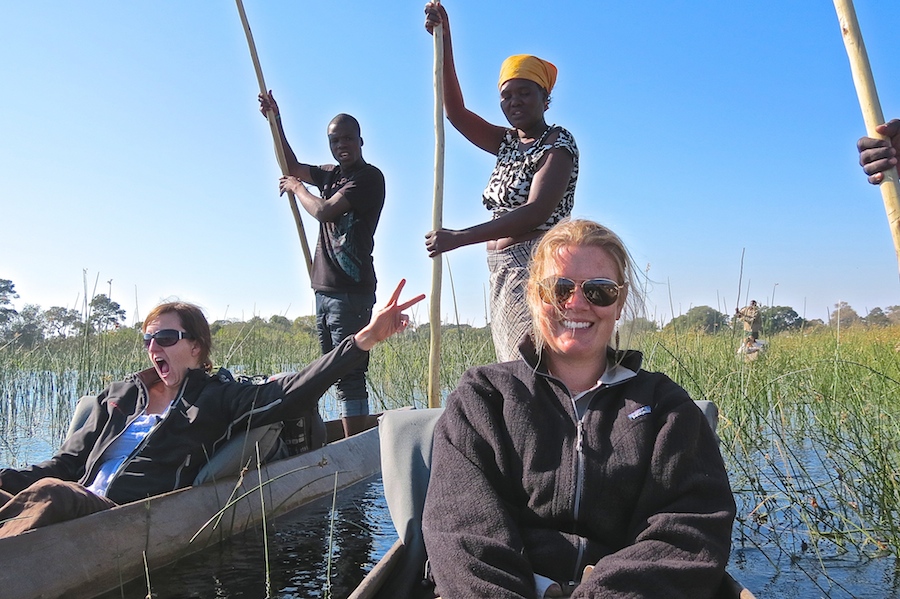 The islands are so remote that you feel completely cut off from the modern world.

The toilet? A hole in the ground.

At night sounds of crashing coconuts and thrashing palm trees as elephants wind their trunks around and shake them mightily (to get to the coconuts of course) will strike fear in to even the most seasoned camper. As the ground quakes beneath you, you sit, bated breath, praying  they won’t step on your tent.

Delta cruises get you up close and personal to one of the most dangerous creatures of all: the hippopotamus. 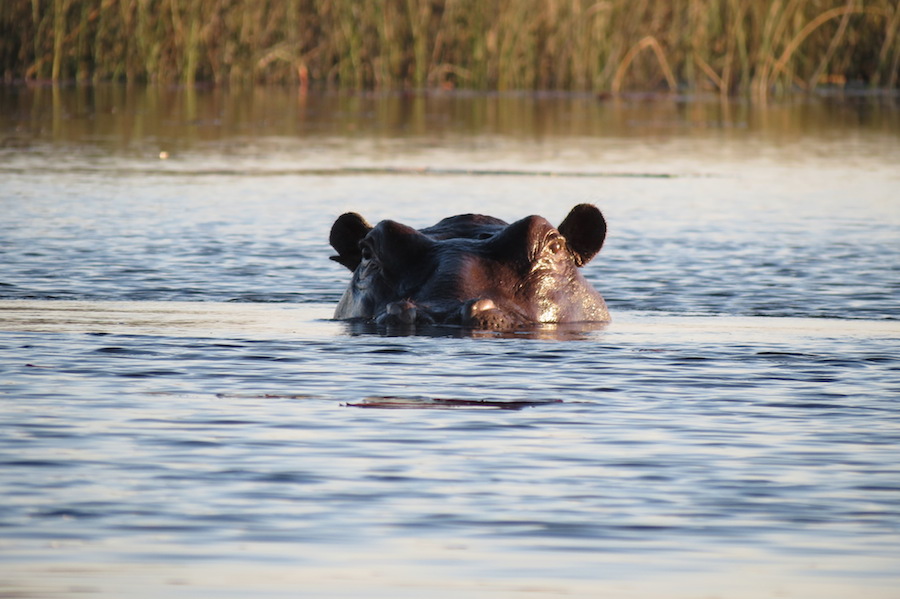 Safaris are on foot, another cool-factor of the Delta. (Think about it… you’re on an island accessible only by canoe… There are no vehicles!) 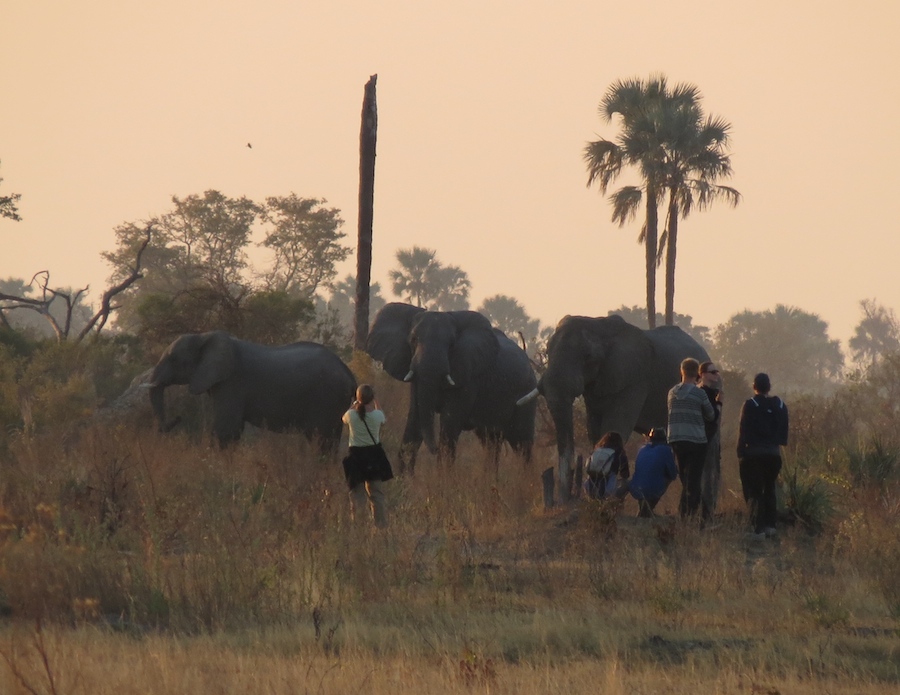 It’s rare to get a chance to walk up to wild animals in Africa. I love this about the Okavango.

A flight over the delta yields a great birds-eye perspective. 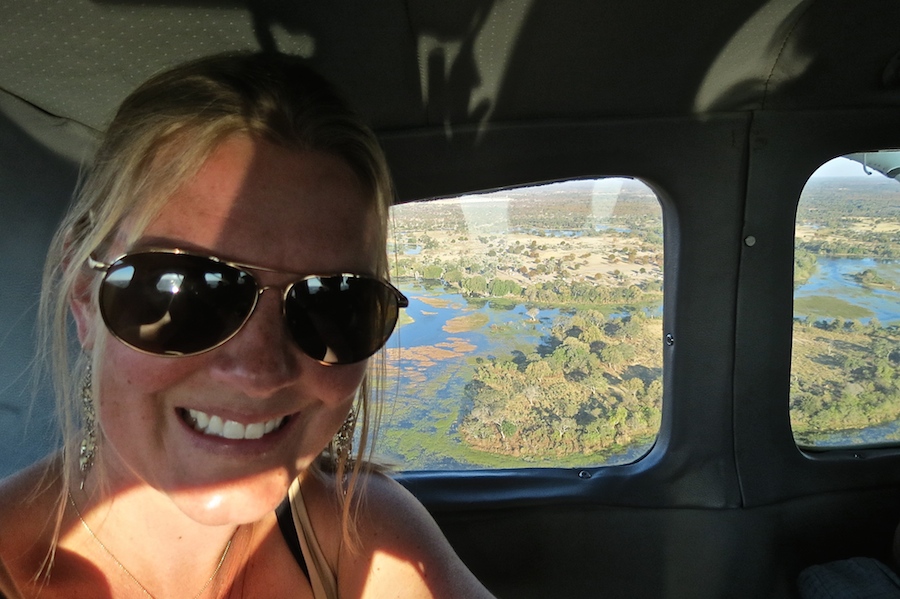 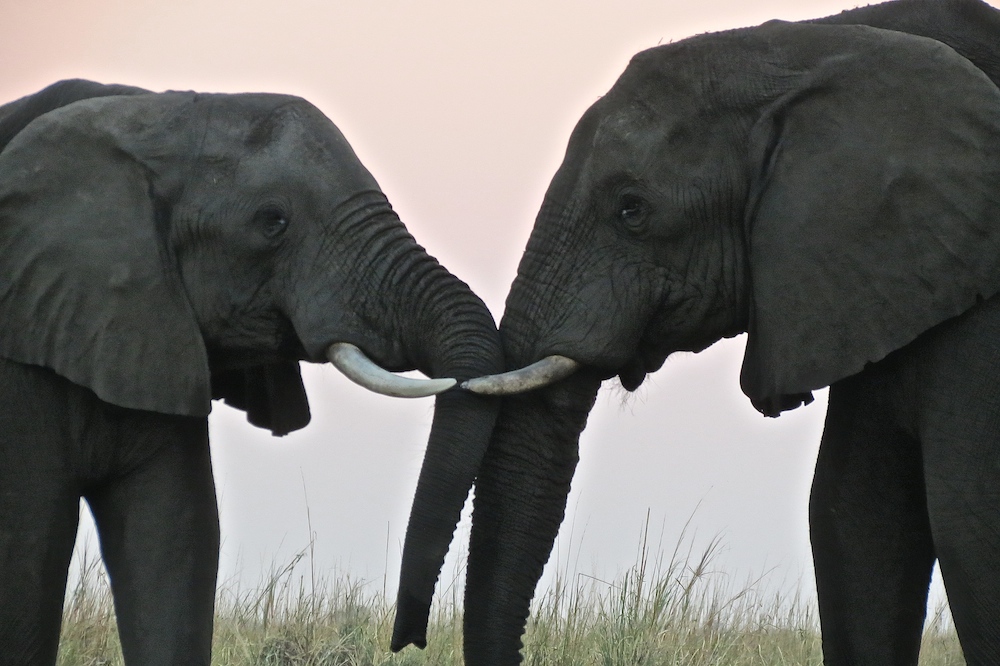 Chobe National Park has it all: lions, buffalo, elephants, leopards, rhinos (the big 5), exotic birds, massive crocodiles, giraffe, zebras- you name it. It has one of the largest concentrations of game in Africa. 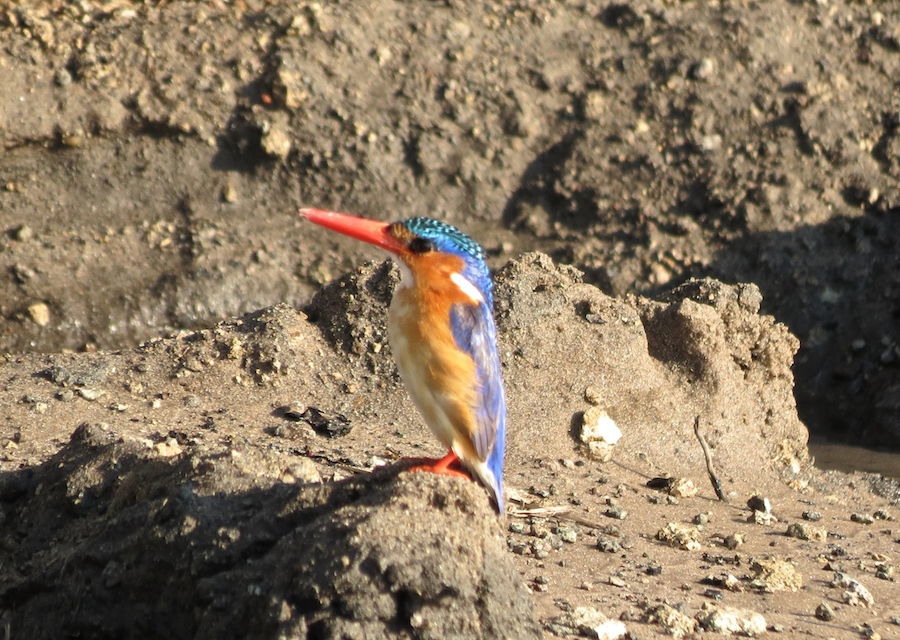 Visitors can enjoy both overland and river cruise safaris, which makes for very diverse wildlife encounters.

Why it’s my favorite: In all of my safari adventures, I’ve never seen a kill. In Chobe, we were lucky enough to witness a pride of lions attack and eat a cape buffalo. Keep in mind that the buffalo are also one of the big five, so named for their inherent danger. (The big five were coined thus by hunters to differentiate the most difficult and dangerous game to hunt on foot. The term has since been adopted by safari rangers for tourism purposes).

Here’s a video of the lions eating a buffalo that is still alive and the herd chasing the lions away.

4. You have an excellent chance of seeing the big 5 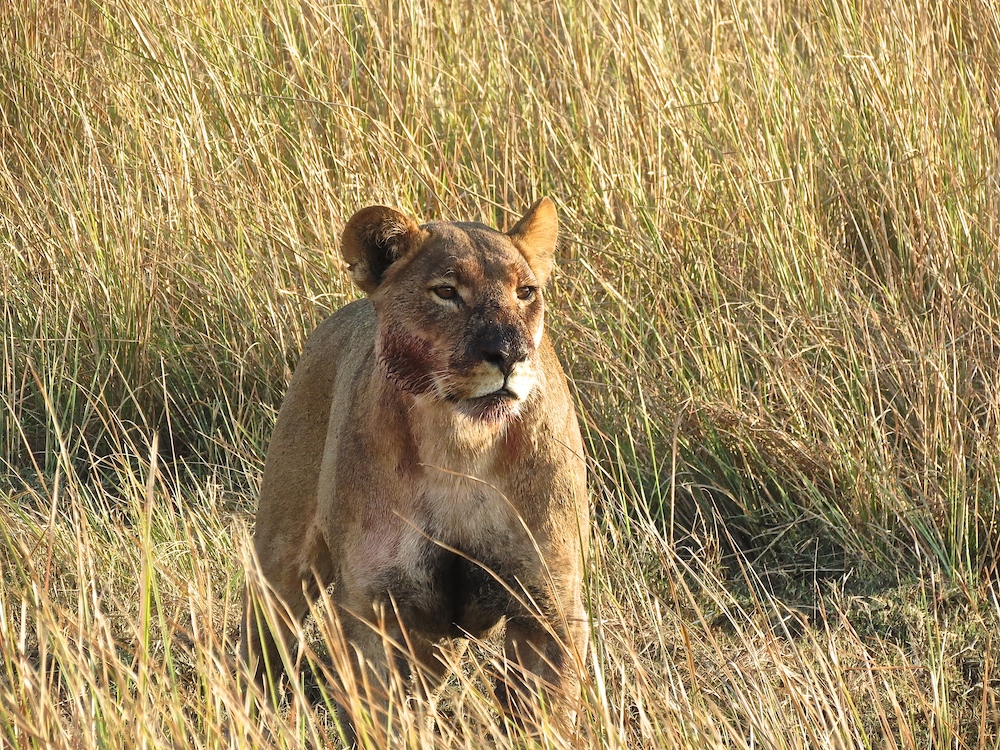 Many African countries boast about having the big five: leopard, lion, elephant, rhinoceros, and cape buffalo. A visitor on safari may or may not see all five in Tanzania, Kenya, or South Africa, depending on which parks you visit and the duration of your stay.

Although I have seen the big five in other African countries like Tanzania and Kenya, it was over the span of a few weeks, visiting several national parks. Botswana is the only country where I’ve seen all of the big five in one day, and one place, Chobe National Park.

So as far as bang for your buck goes, it makes more sense to go on safari in Chobe NP than anywhere else in Africa, if your goal is big five game.

5. Witness some of the continents most spectacular sunsets 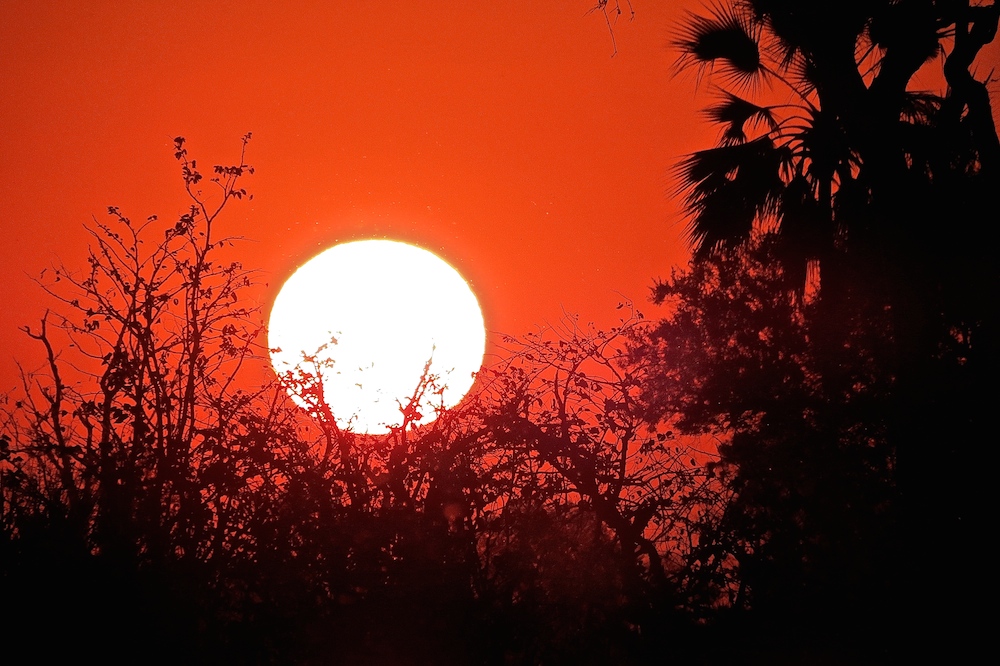 Our guides told us they were the best we’d ever see. The blazing sun lit the sky on fire at dusk each day.

Proximity to the equator? Dry dusty sky? Whatever the reason, the sunsets were just that spectacular. Only in Africa… Only in Botswana… 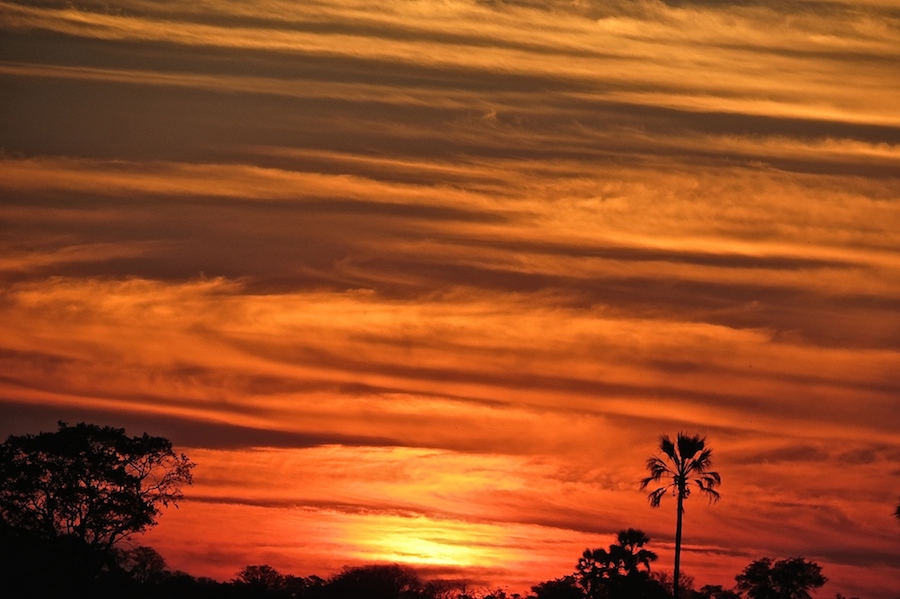 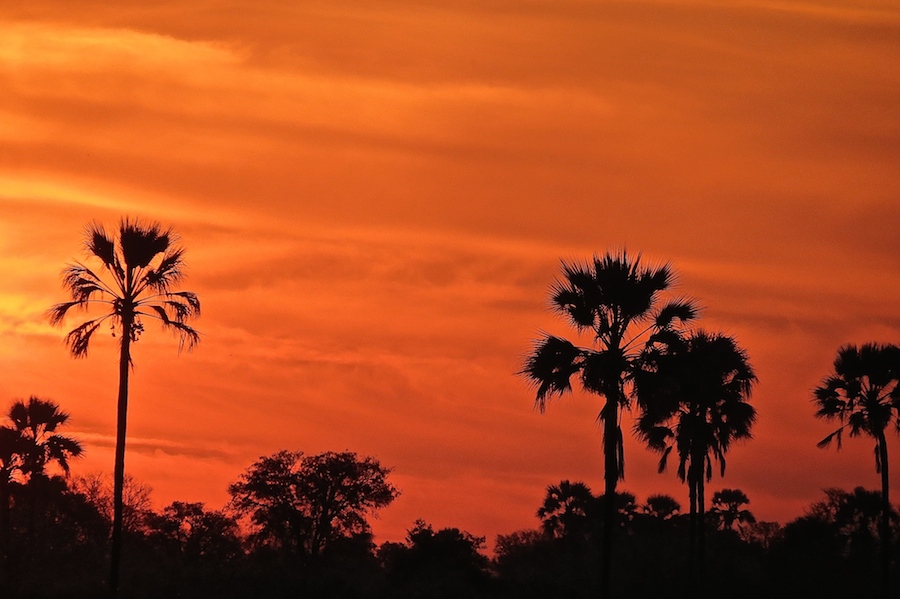 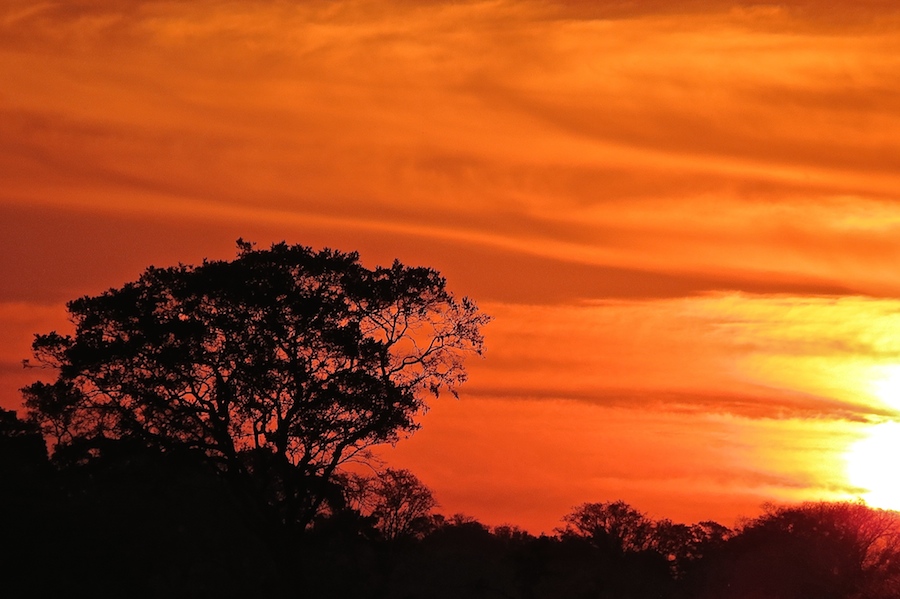 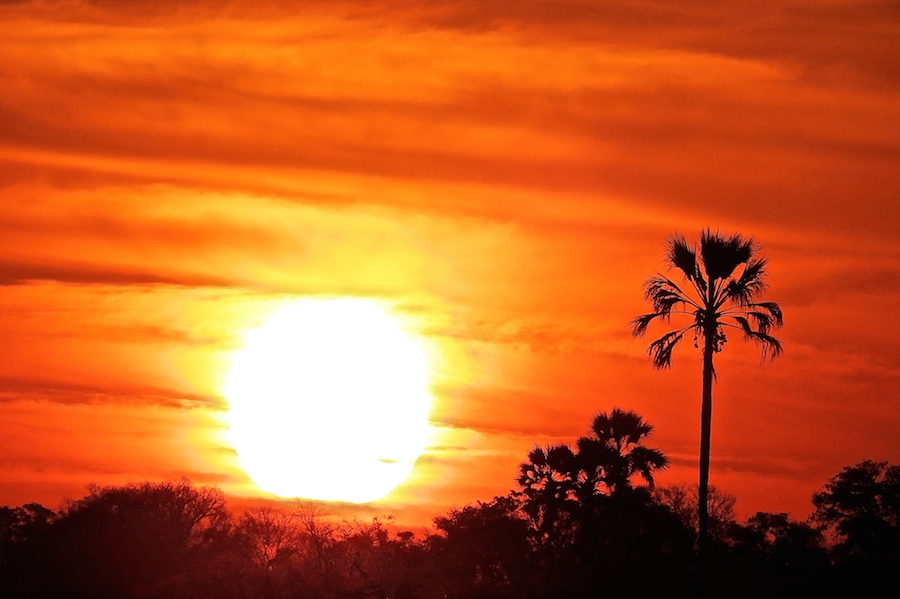 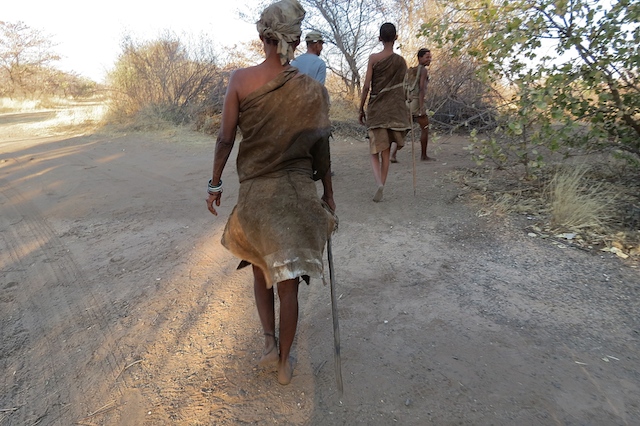 The vast Kgalagadi stretches across seven countries and offers refuge to the most unique creatures. It’s also the home of the San Bushmen, the most ancient living human race on Earth (see below).

7. Hang with the oldest people on the planet 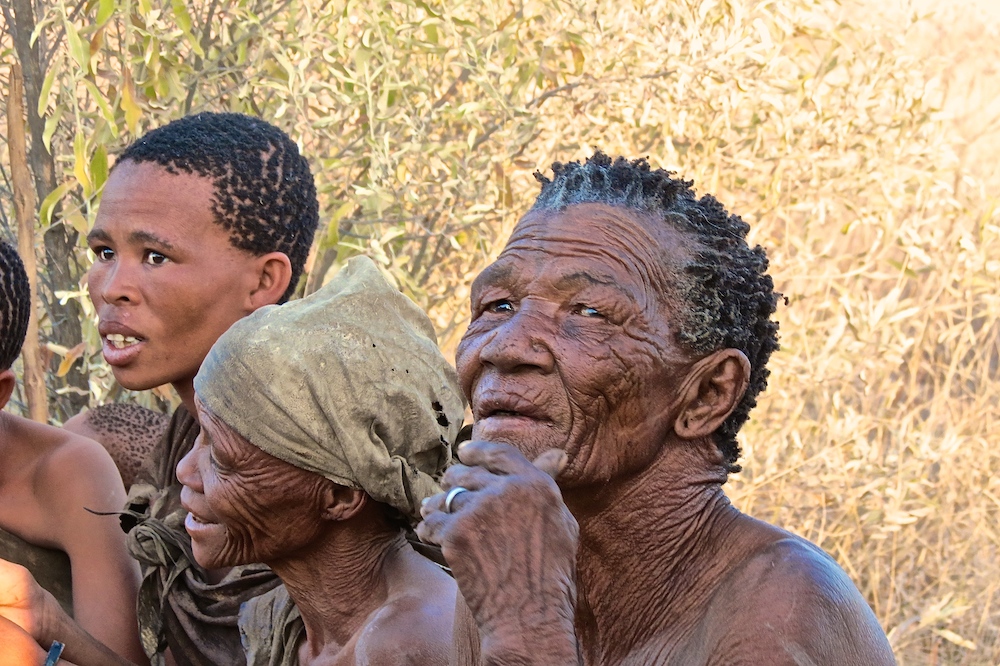 The San (often referred to as Bushmen) are said to be descendants of the original man. Still living as they have for thousands of years as hunters and gatherers, the San are the oldest human race on the planet. Confirmed by a comprehensive African DNA analysis, the study showed that the San were the most genetically diverse and therefor likely the oldest continuous population of humans on Earth.

The beautiful thing about the San is that they only take from the earth what they can consume or use right away. Therefor, they know nothing of greed or waste. If a San warrior kills a buffalo, they use every single part of the animal. They live in harmony with the earth, much like many Native American peoples did.

Oh, and if you’ve ever seen The God’s Must Be Crazy, you may be familiar with the funny clicking language. Here’s a clip of our group attempting to learn to click.

8. Camp underneath baobob trees near Maun 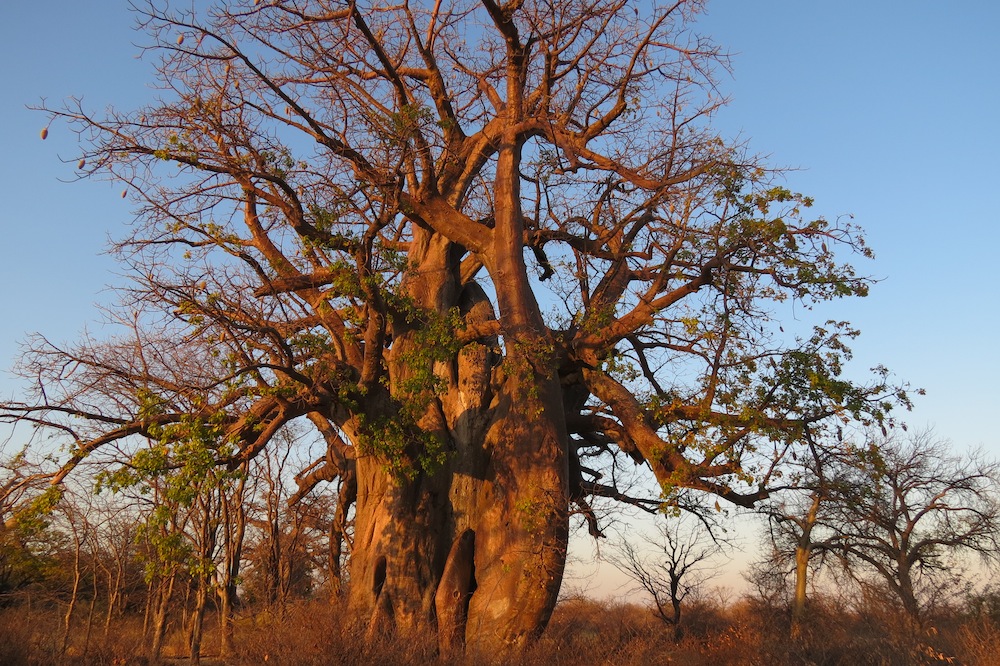 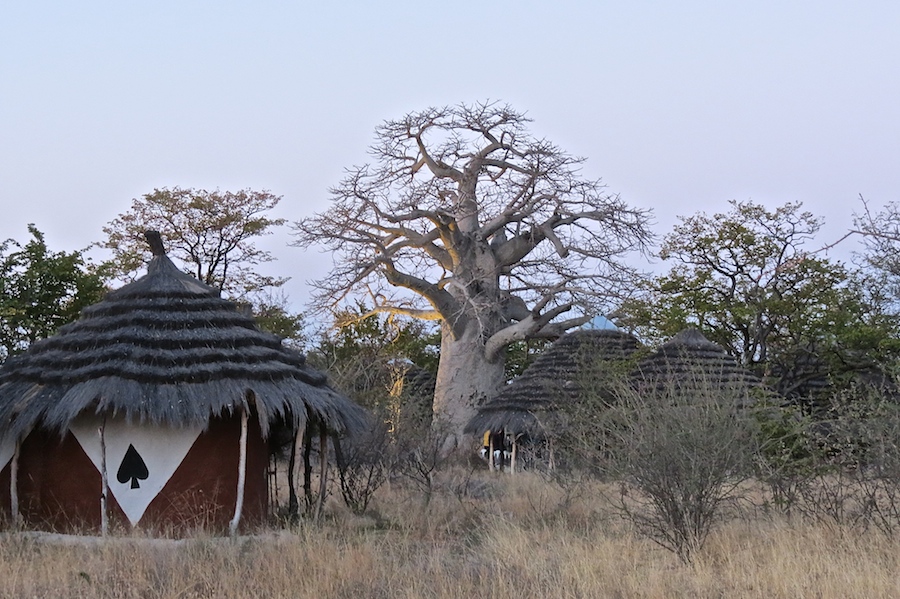 That quintessential African Adansonia, The Tree of Life,  is synonymous with the continent. 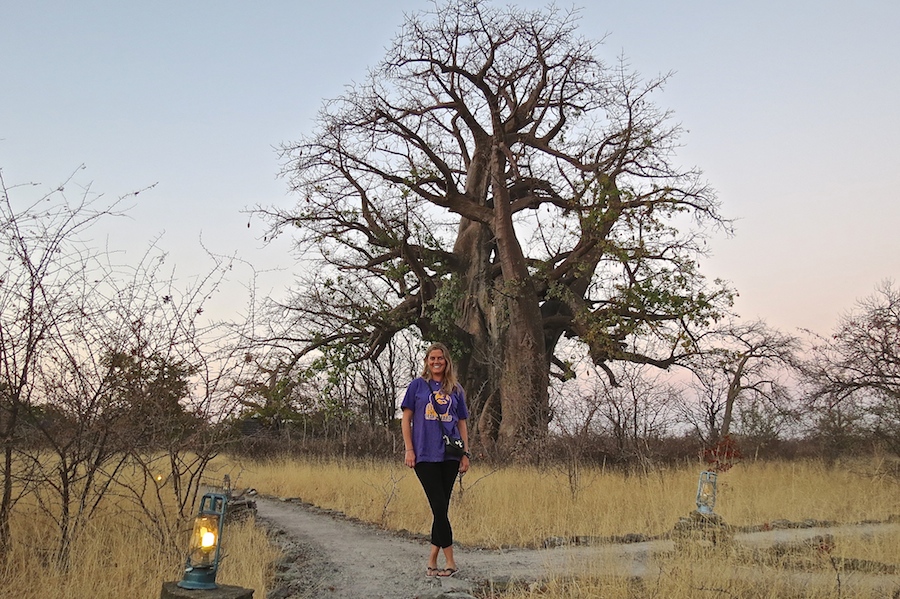 Are you ready to go to Botswana?? 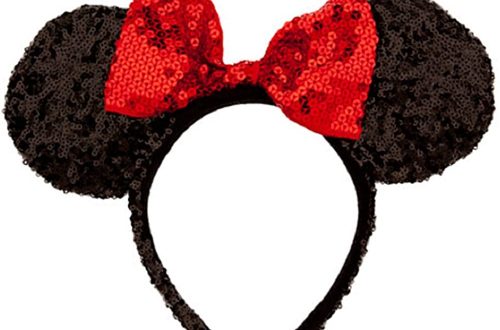 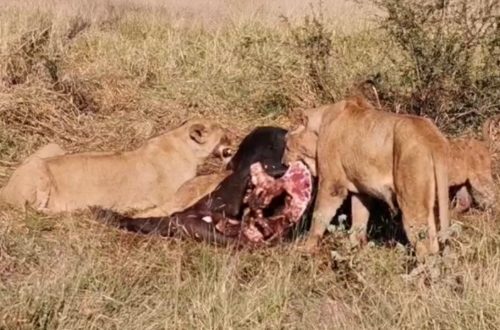