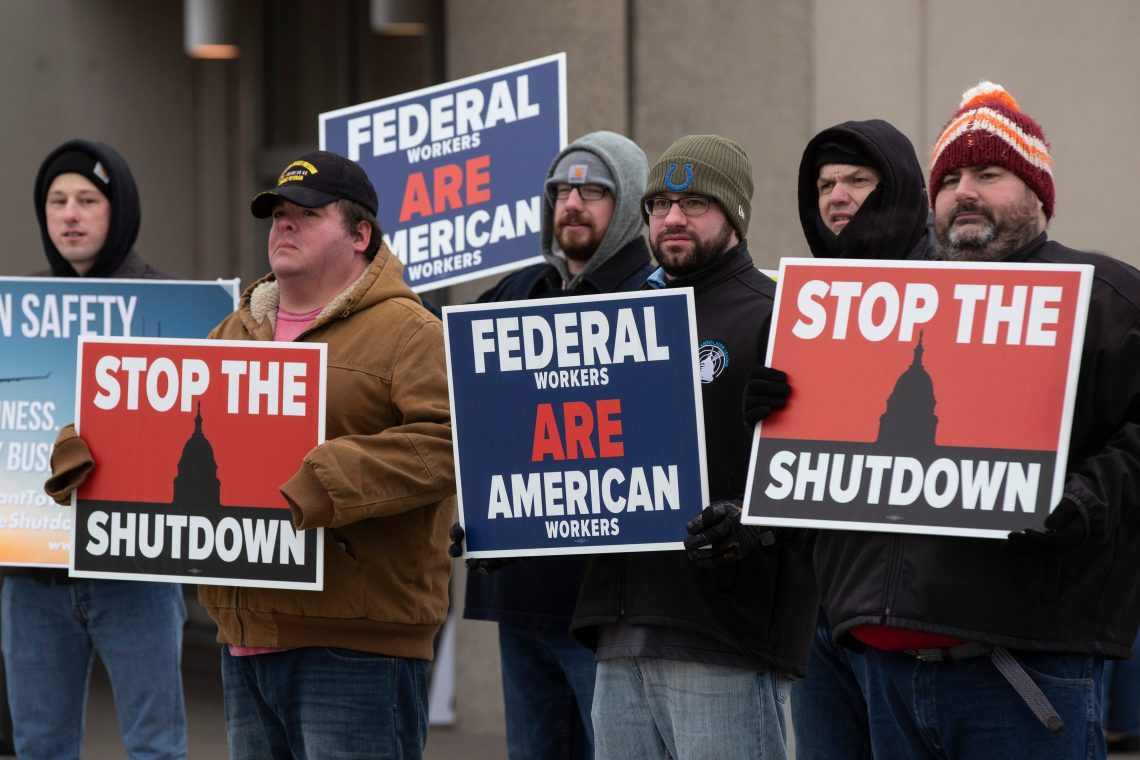 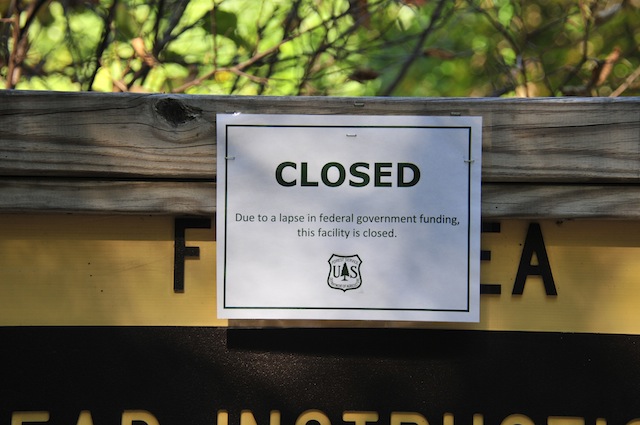 It’s all over the news, and it’s affecting most Americans in one way or another. To some, it’s an inconvenience. To others, it really hurts. For my family, we feel both the superficial and the more serious effects.

My hubs works for a company that is funded through a government contract. Right now, the funds have not been appropriated for fiscal year 2014. So my husband was kindly asked to not work. Gee, thanks. Unpaid staycation.

On top of that, we were forced to cancel our trip out West to Bryce Canyon and Zion National Parks, since national parks and forests are also closed.

Oh! And we were reported for “illegally” hiking in a national forest last weekend! I think the evicted campers were much worse off than we were, though.

But……We’re making the best of it. 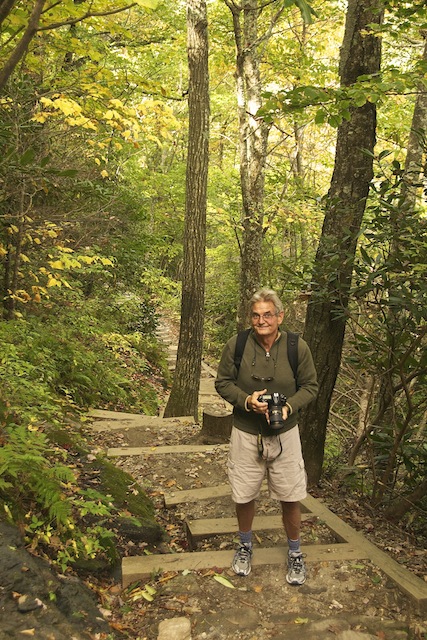 That’s my dad. The hiking photo-man!

Dad and his girlfriend Lee invited Alan and I to North Carolina for a weekend in the Highlands. If you’ve never been, it’s a beautiful little slice of heaven just south of Smokey Mountain National Park. The town is adorable with plenty of excellent food (you know I love food!), and the hikes offer gorgeous views of mountain valleys and waterfalls. I read in a guidebook that the area has the highest concentration of waterfalls east of the Mississippi.

I was a teensy bit worried because we would be hiking in Nantahala National Forest. Weren’t all national parks and forests closed? What did this mean for us? 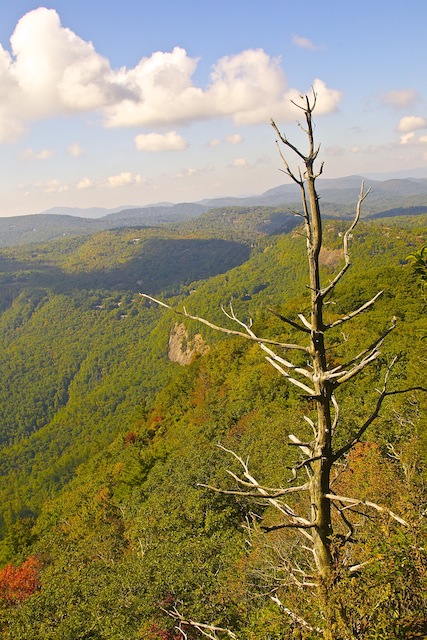 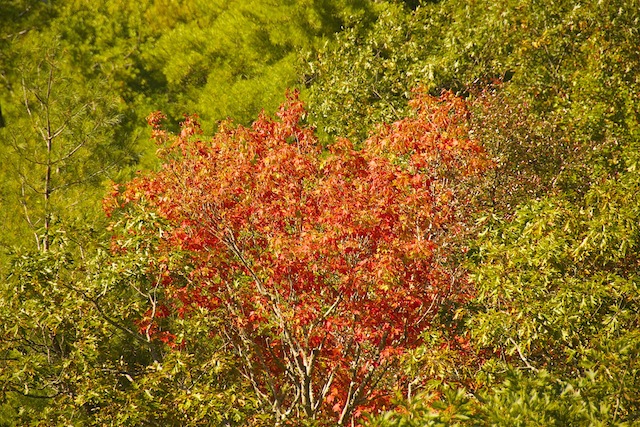 Our first short hike on the two-mile Whiteside Mountain loop went off without a hitch. A slow steady climb to the top yielded amazing views. We completed the trail with no hassles and no signs of government shutdown enforcers. 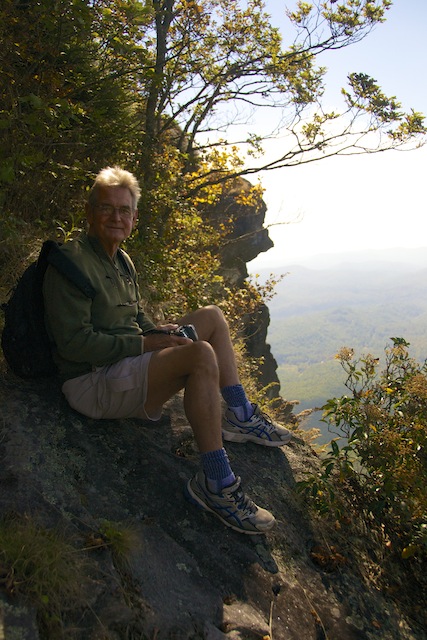 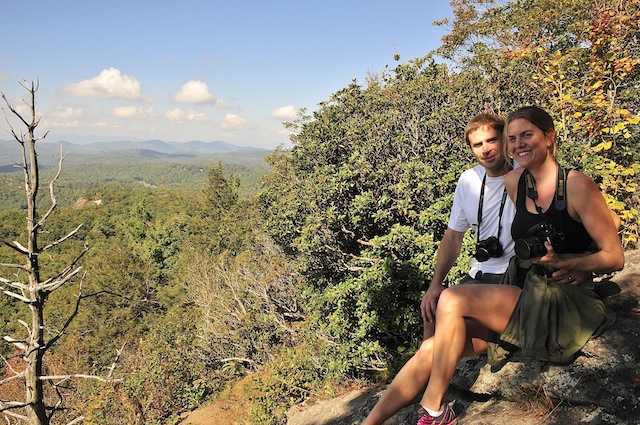 Everything seemed to be going too smoothly. Hmm. When were we going to see the systemic cracks from political ineptitude filter down to us in a national forest? I felt like one of those kids who closes their eyes thinking the bad thing will just disappear. Yea, that doesn’t work. 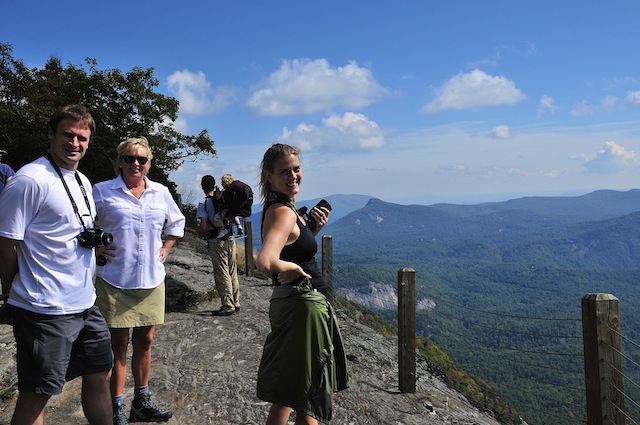 After a delicious lunch, we made our way to the beautiful Whitewater Falls and came across this very professional looking signage. 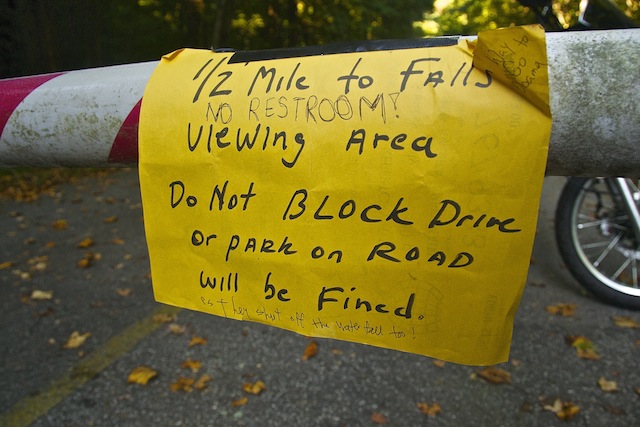 Notice the civilian commentary at the bottom: “P.S. They shut off the waterfall too.” Love it. 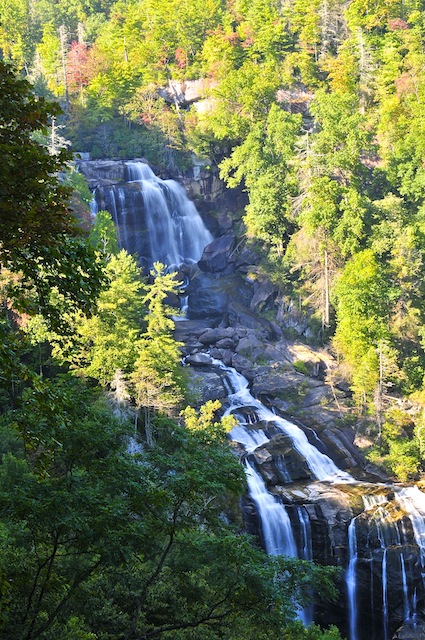 Eh, no big deal. We have to walk a little further to get to the waterfall and the trail head. That’s what everyone else was doing.

The falls were gorgeous. 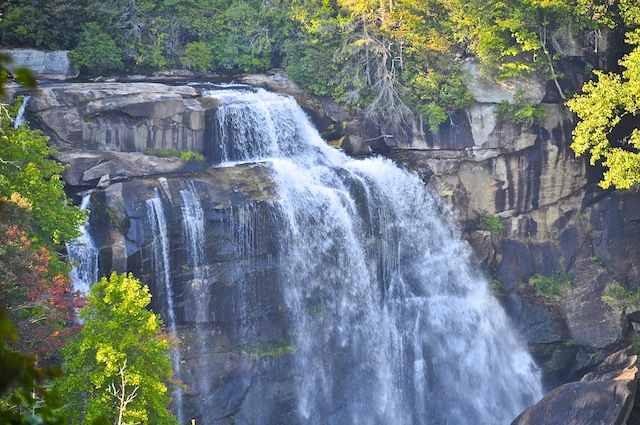 The hike was a bit dicey. I say that because I managed to 1) twist my ankle (which isn’t saying much; it happens about once a year) and 2) get stung by a bee on my other ankle (it still itches like mad, 6 days later). It was NOT my trail, it seemed. 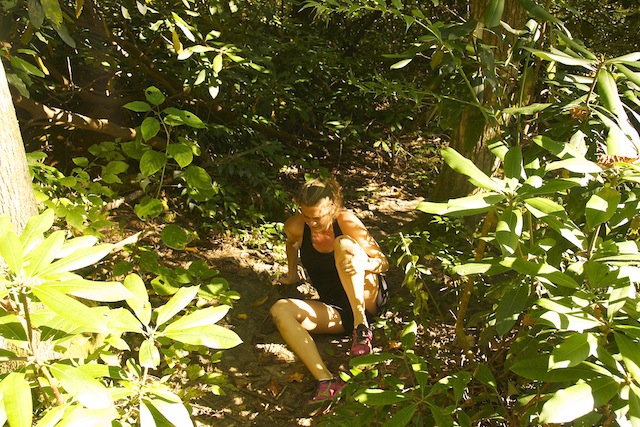 Fall = Fail. Don’t you love that hubs documented my fall from grace? He took about 5 photos while I was “Ouch”ing.

Despite sustaining major injuries, we moved on, enjoying the scenic hike across rocky streams. 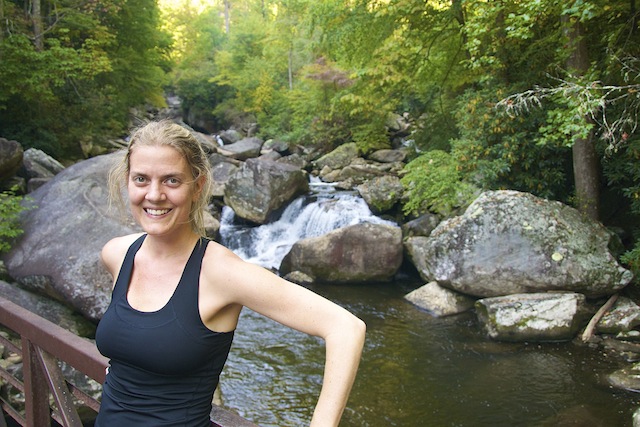 Lots of photos of me…sorry. Alan hijacked my camera and got a little trigger happy. 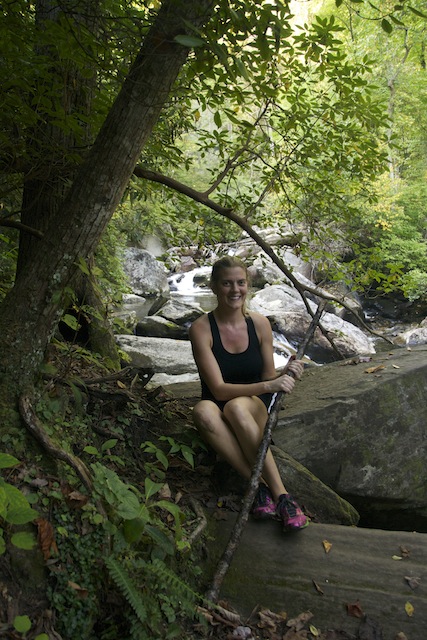 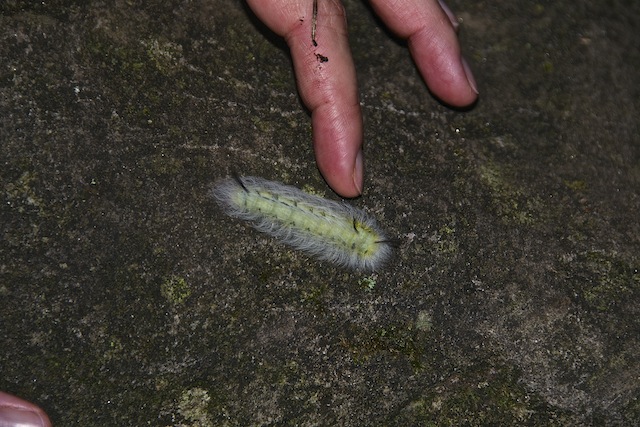 As we made our way back to the trail head and started walking the short distance to the car, we had one last phenomenal view. 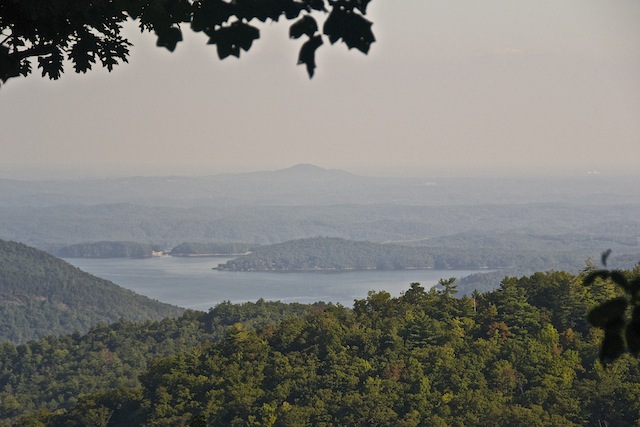 Then it happened. A police officer standing next to his truck said something like, “Did you happen to see that sign,” pointing to one that looked a bit like this. 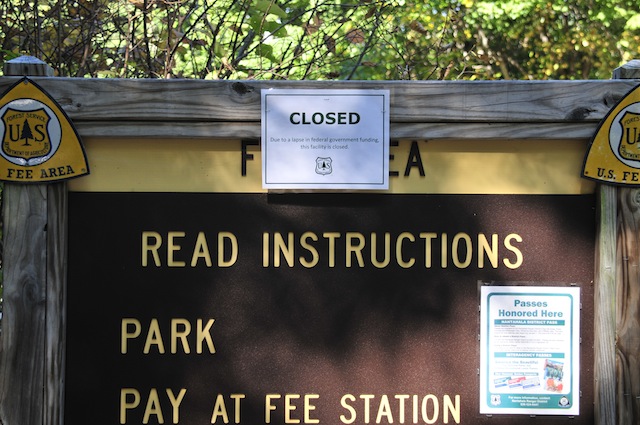 “That little, tiny piece of paper?” My dad asked. “Yes,” the officer said. “I’m going to need to see some identification.” Really?? Wow.

“What are you going to do with it?”

“You know there are more people in there [hiking]. Are you going to report them?”

“Yes,” sighing “I have to do my job. We all know how ridiculous this is. Sorry”

Then the officer explained that he didn’t want to be the shutdown enforcer, but he had to be. The only reason he needed to take Dad’s drivers license and report him was to appease his boss and prove that he wasn’t “at home sleeping on the couch.” Fair enough.

“This isn’t even the bad part. I have to go evict a bunch of campers on vacation.” OK, so I started feeling badly for the guy. He was just the messenger. And the message was really crappy.

What did that mean for the rest of our weekend? Would we be able to hike anymore?

Apparently any parking lots or areas that receive public service were off limits. That didn’t really stop us from parking in said lots and hiking the next day. And guess what, no one was there to report us.

So, it’s a crap shoot really. We just continued about our business as usual, and everything seemed fine.

As I said earlier, though, we decided to cancel our trip out West because Bryce and Zion National Parks remained closed. After some research, I realized that it wouldn’t be quite as easy to break the rules out there. We might not even be able to access the parks at all.

I was bummed. We started planning this trip last June, when I presented it to Alan as a birthday gift. How much money would we lose by having to cancel or reschedule our trip? The answer? None.

When I contacted Delta and informed them of our situation, they said they were waiving the normal $200 change fee penalty due to the government shutdown. Bonus points for Delta. We would loose the companion ticket I used for the purchase, as it expires in October. (Delta gives you one $119 companion ticket a year when you have a Delta American Express). However, Alan has a $400 voucher from volunteering his seat on an oversold flight, which happens to expire in November. There also happens to be another three-day weekend in November. Done. Rebooking our flights for next month and coming out even (or maybe under).

Added bonus: When I originally booked our hotels (using Choice Rewards points for free stays), the only properties available were really crappy Roadway Inns or a Comfort Suites thirty miles or more from the parks. When I rebooked, I was able to reserve higher rated (read: nicer) hotels inside the parks. Score.

Sometimes bad things yield a better situation in the end. Now lets hope that DC’s dysfunction subsides soon so we can really get back on track.

How has the U.S. government shutdown affected you? 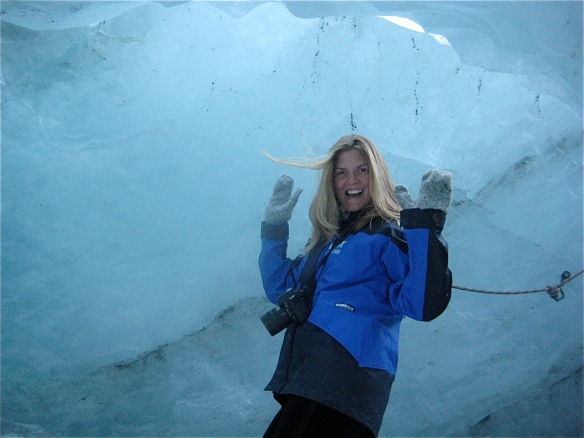 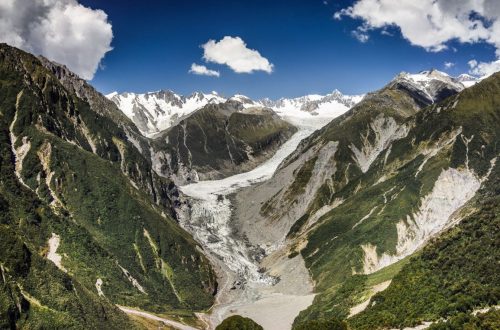 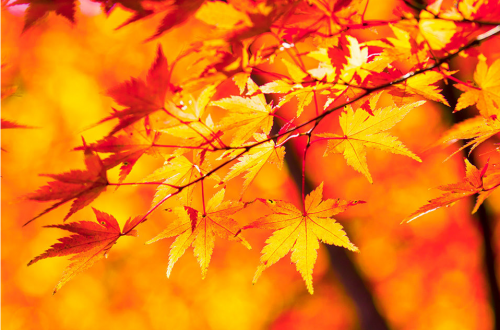