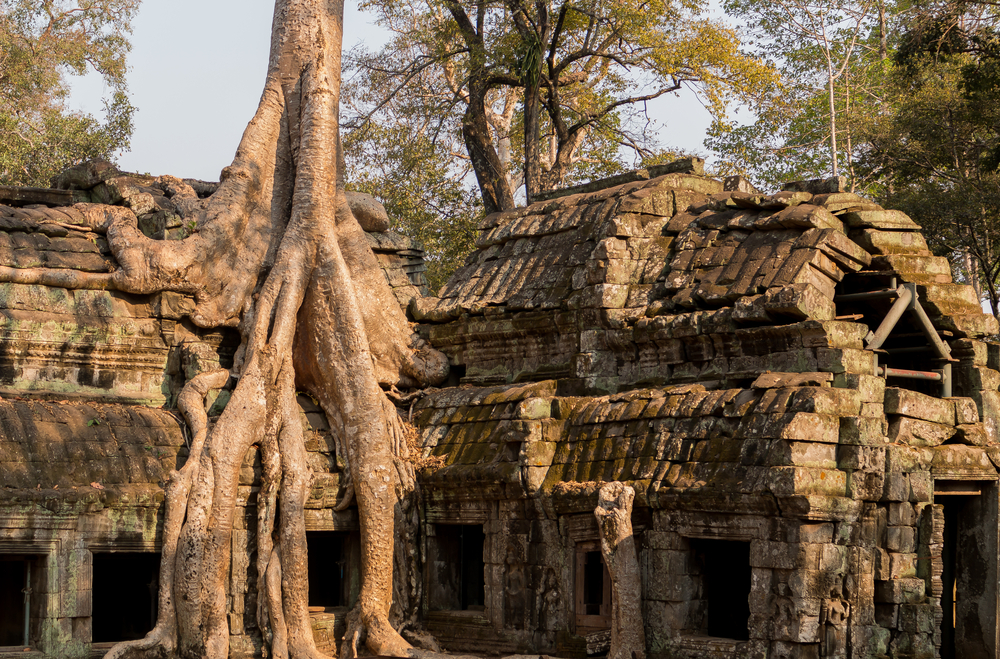 Seeing Angkor Wat at sunrise should be on anyone’s must-see list. You won’t be the only one there, however. Expect a lot of tourists! It’s still best to go at sunrise, as more tourists arrive later in the day, and the heat becomes stifling anyway.

Angkor Wat is a Hindu temple commemorating Vishnu. I am still baffled that it was not selected (the world voted) as one of the new Seven Wonders of the World, as it is the largest religious monument on the planet. “Angkor Wat” means Temple City in Khmer, and it is at the top of the high classical style of Khmer architecture. The temple resonates deeply as a symbol of Cambodia and is the country’s most visited attraction. The Angkor Wat image even appears on the Cambodian flag.

I love this quote from Lonely Planet: “Soaring skywards and surrounded by a moat that would make its European Castle counterparts blush, Angkor Wat is one of the most inspired and spectacular monuments ever conceived by the human mind.”

Mount Meru, Abode of the Gods

Angkor Wat was likely originally constructed as a funeral temple for a king, as it faces west, the direction of the setting sun, symbolic of passing into the next life. The main structure symbolizes mystical Mount Meru, Hindu’s home of the Gods, with its three-tiered pyramid, topped by five lesser towers (symbolizing smaller peaks). The lower courtyards symbolize continents, and the moat represents oceans. The seven-headed serpent beings (naga) along the causeway create a symbolic rainbow bridge, enabling man to reach the Gods’ heavenly home.

Journey to the center of the universe

According to Eleanor Mannikka, the spatial dimensions of Angkor Wat coincide with the links of the four ages of classical Hindu thought. Therefore, walking from its outer causeway through the main entrance and courtyards to its highest tower is a symbolic journey to the beginning of the universe (or the first age of its creation).

In order to climb the most sacred, highest tower in Angkor Wat (remember, Mount Meru, home of the Gods?), all are required to have covered shoulders and knees. The Cambodians do not mess around with this and will refuse entrance to any who do not comply. A shawl or wrap covering your shoulders will simply not suffice! This was my predicament. A friend lent me a cardigan, enabling me to make the heavenly climb. I saw men removing their shirts to give their wives a chance to climb the tower (I’m not sure if that defeats the purpose of showing humility before God?).

We were told that Cambodians hope to eventually integrate this dress code enforcement into the entire complex, starting at the top and slowly working down to the entrance (to give us Westerners a chance to adapt, of course).

Angkor Wat is famous for having over 3000 enchanting apsaras (heavenly nymphs) carved into its doors and walls, each one unique. Thirty-seven different hairstyles are represented in total.

An equally important measure of Angkor Wat’s fame lies in its detailed and extraordinary bas-relief friezes, mainly depicting episodes from Hindu epics and historical war scenes. The most famous is The Churning of the Ocean of Milk.

l’m not quite sure what these youngsters were doing, waiting in the courtyard near the main tower entrance. I quite enjoyed their costumes, though.

Skipping, now, to what was probably the highlight of the Angkor Ruins complex for me, other than Angkor Wat itself….

I’m a big Angelina Jolie fan. I can’t help it. I also love fascinating geographical landscapes. Therefore, it’s very logical that I would watch Tomb Raider in 2001 and decide I would one day visit the mysterious tree-eaten Ta Prohm.

It was our last site to visit during a very long, very hot, twelve-hour day of exploring the Angkor ruins. Many in our group succumbed to heat exhaustion and dehydration, some even getting sick. *(Suggestion: Do not try to explore all of the highlights of Angkor in one day).

I was still excited to walk along the bridge towards the entrance of Ta Prohm.

After entering the main gate, it’s a good twenty minute walk to reach the temple.

Ta Prohm was constructed in the late 12th and early 13th centuries, founded by the Khmer King Jayavarman VII as a Mahayana Buddhist monastery and university. The site differs from most of Angkor’s other temples in that it has been left in much the same condition as it was found. The encroaching jungle and trees growing out of its walls make this atmospheric and photogenic temple a favorite of visitors and a photographers’ dream.

Weary from the heat and lingering day (remember, we were up at 5 AM to see the sunrise over Angkor Wat!), we entered Ta Prohm.

The most distinctive feature of Ta Prohm is the trees that are reclaiming the site by growing out of, and into, the ruins. It is a mysterious, seductive vision of ancient architecture and nature intertwined. You feel as if you are stepping back in time- or into a movie set (literally). 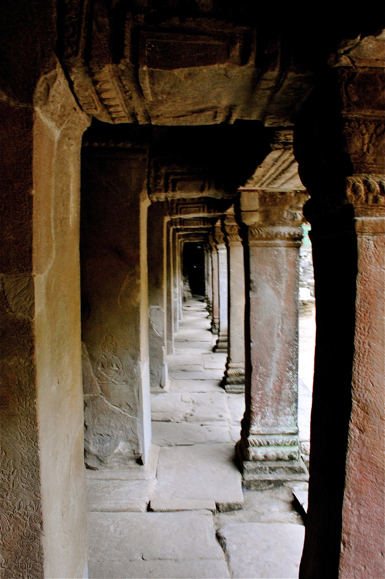 Angkor Wat and Ta Prohm definitely lived up to my expectations. However, I strongly believe that, as a group, we would have enjoyed both sites more if we had not been so exhausted from cramming about seven temples into a twelve-hour, (torturously hot) day-long whirlwind tour of Angkor. I would recommend two to three days to see all of its highlights, if you have the time.

Have you been to Angkor? Would you agree? I would love to hear your thoughts! Please leave a comment! 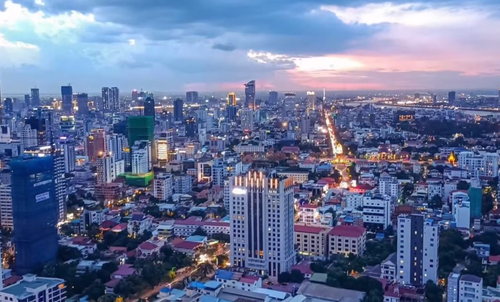 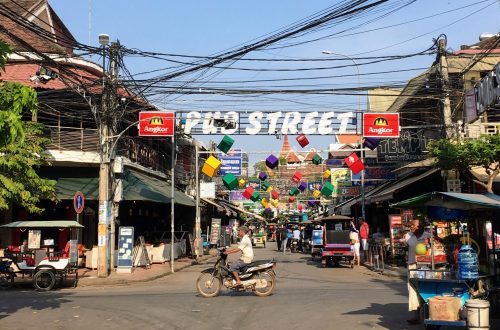 From Thailand to Cambodia, Border Crossing and Siem Reap