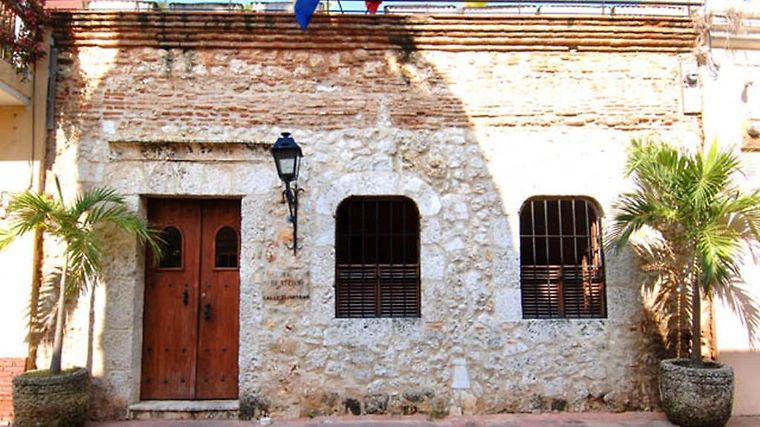 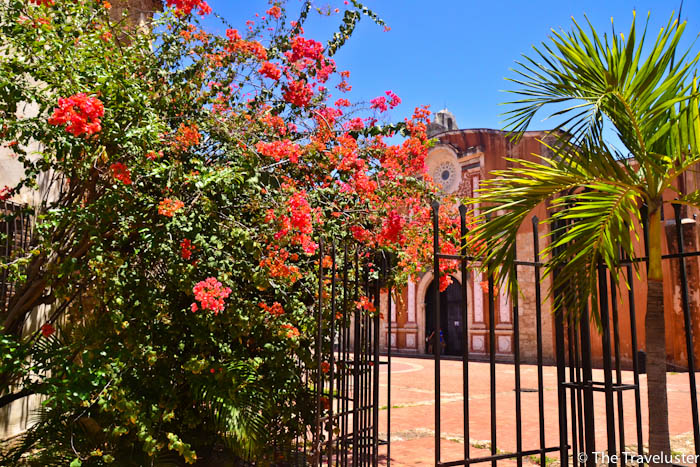 In 1492, Christopher Columbus landed on the island of La Isla Española (The Spanish Island, later shortened and now called Hispañola), initiating the first dramatic interaction between native Americans and Europeans. Six years later, his brother, Bartholomew Columbus founded Santo Domingo in 1498. The UNESCO World Heritage Site (526) retains much of it’s original charm and many of the Americas’ firsts, like the oldest: fort, functioning cathedral, and nunnery…

Planning a stay in Zona Colonial and considering which accommodations to choose, there are few things to consider:

I started my original search using FlipKey, which revealed some neat looking apartments in the area and a couple of boutique hotels. One of the places that stood out was El Beaterio. The rates seemed very competitive, location perfect, and the hotel’s design and history drew me in. That’s when I decided to look into boutique hotels more specifically and steered away from renting an apartment or room in a house.

One of the first sites listed in a Google search was one for Zona Colonial, which I found to be extremely informative and appealing. Their lists of things to see, places to stay, where to eat, etc. were spot-on (in retrospect). Sure enough, the first “place to stay” was El Beaterio.

Click. I went to the hotel’s website, saw that they had availability during the dates I would be in Zona Colonial, and I booked my room. I was extremely excited about staying in a sixteenth century, all-brick, converted convent. I knew I would spend plenty of time at the hotel while engrossed in my laptop, so ambiance and comfort were extremely high priorities on my list.

The Price is Right. Although it’s a three star hotel, it felt more like a four star to me (not that I’m a star connoisseur or really care about such things, but I know some people use this as standard baseline). I thought the room pricing was very competitive, starting at $75 a night for a single room and up to $150 a night for a quad room. This, of course, also includes a warm, cooked to order breakfast with coffee and juice. 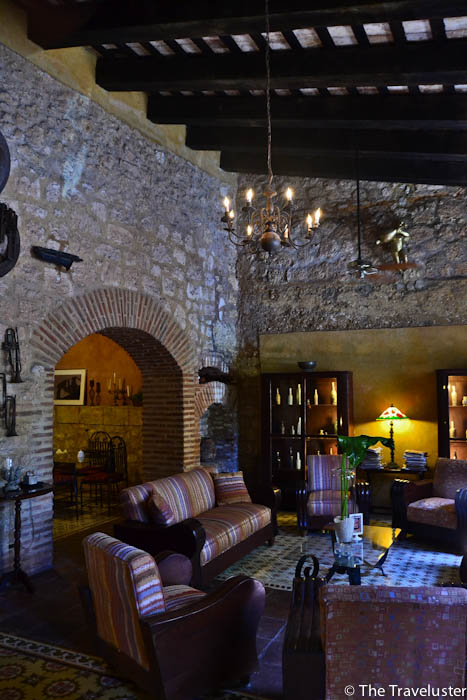 The Decor. Sitting in the front parlor under the tall, exposed wood-beamed ceilings, looking through the old brick archways, it was hard to shake the feeling that colonial clad Spaniard wearing a wide-brimmed, feather trimmed hat will walk right past you. 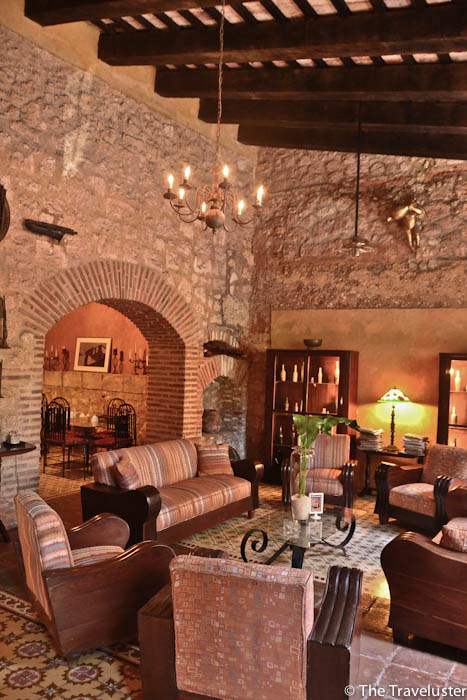 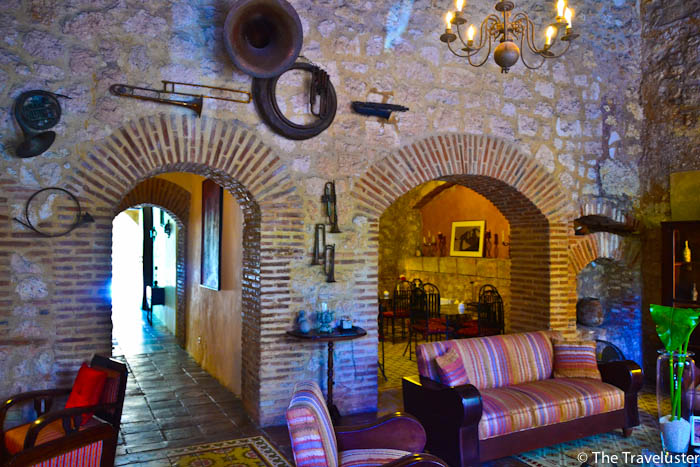 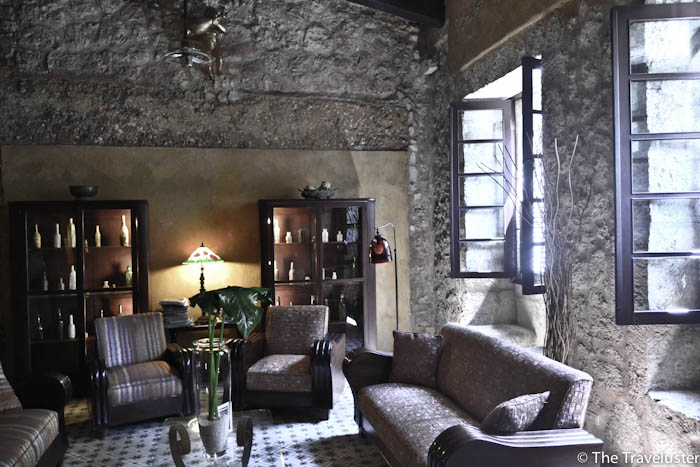 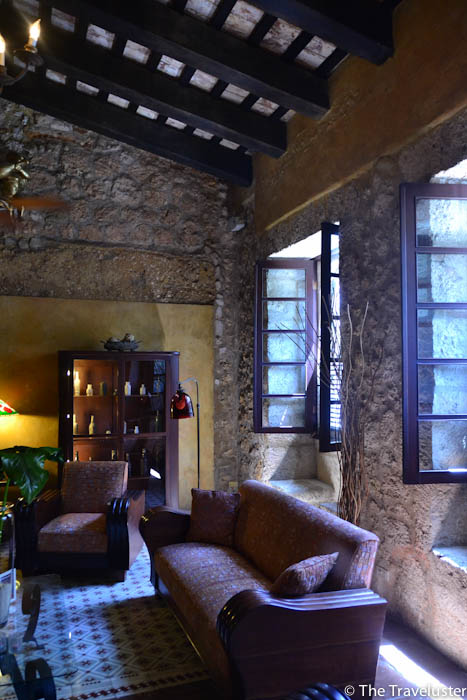 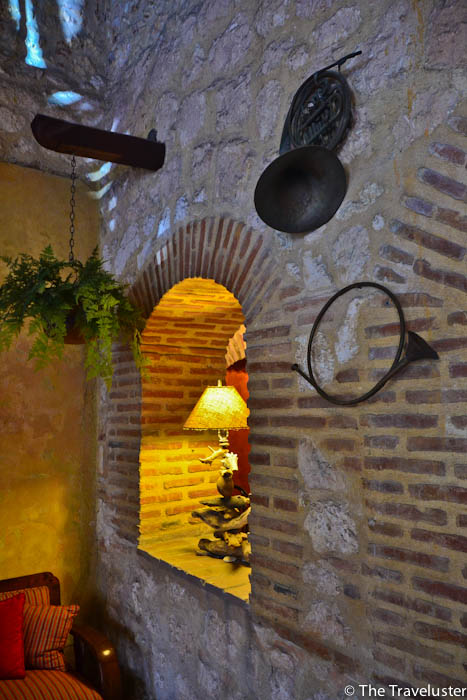 The open-air, cozy Spanish courtyard is filled with palms, ferns and flowers. Umbrella-shaded, cast iron tables invite you to sit and relax with your morning cup of coffee or nightly glass of wine. 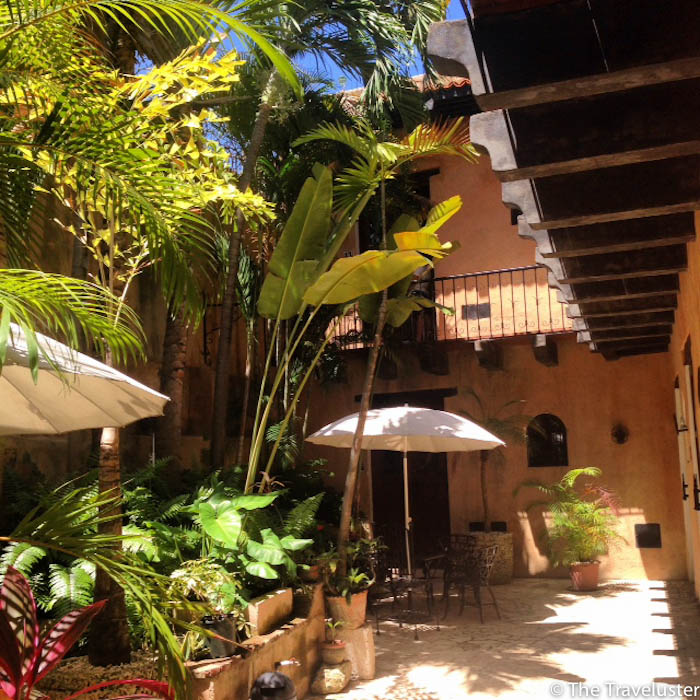 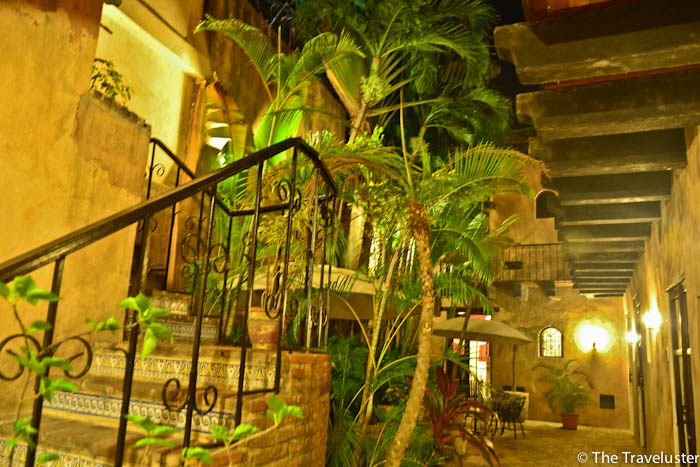 Courtyard at night- so romantic! Too bad I was alone 😉

Friendly Staff. I arrived in Santo Domingo well past midnight. Initially, I was concerned that no one would be at the hotel’s front desk. There are only 11 rooms, after all. When I arrived, I was greeted by the friendliest Dominican man who was expecting me (I did email them with my flight info, so I guess I should have expected that). His English impeccable (which was good for my very rusty Spanish that always takes a few days to polish-up), he swiftly checked me in, gave me the wifi information and times for breakfast, and he carried my bags to my room through the courtyard. Once in the room, he showed me how to operate everything from the very efficient AC to the safe to the TV.

Throughout my stay, I encountered helpful, informative staff who were genuinely excited to have me and their other guests at El Beaterio. It’s so nice to feel that sense of pride people have for the place they work when they truly enjoy it.

The Rooms. Handsomely decorated with cast iron furniture in a “minimalist style that evokes the austere elegance of the era,” the rooms are sophisticated and exude old world charm in sync with the rest of the hotel. High ceilings, exposed wood beams, candlesticks and intricately tiled bathrooms add to the colonial ambiance. The remote controlled AC is very effective and strong (which you need in this climate), and there is a TV mounted on the wall in front of the bed. 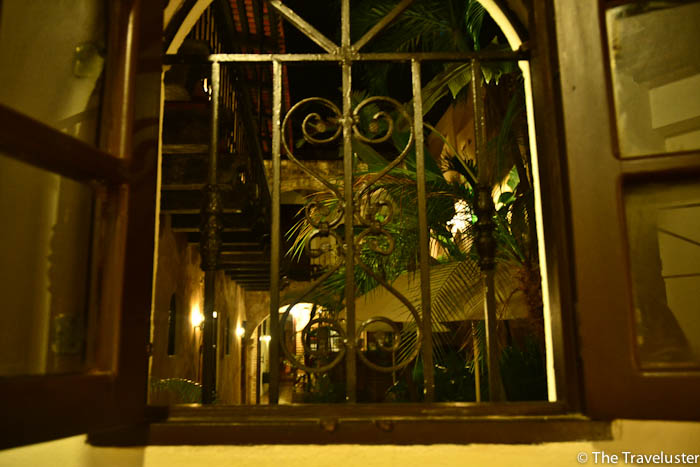 View of the courtyard through my bedroom window. 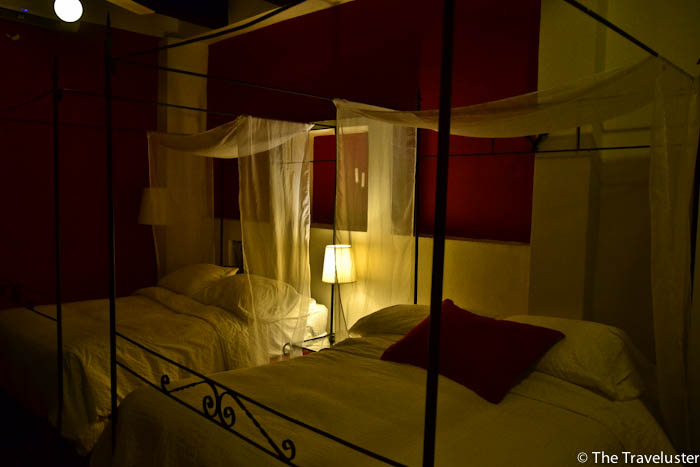 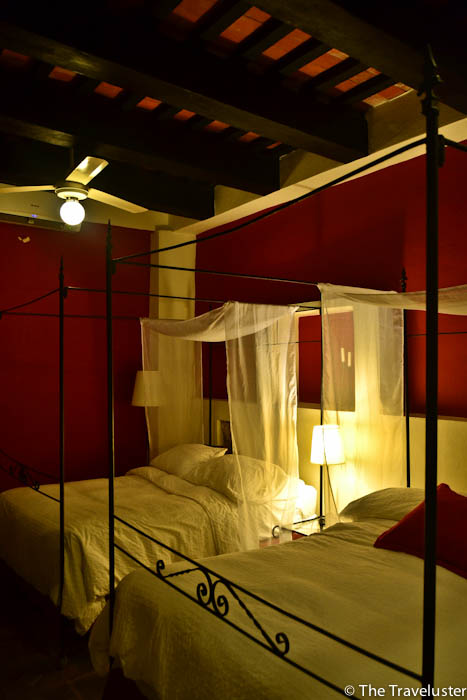 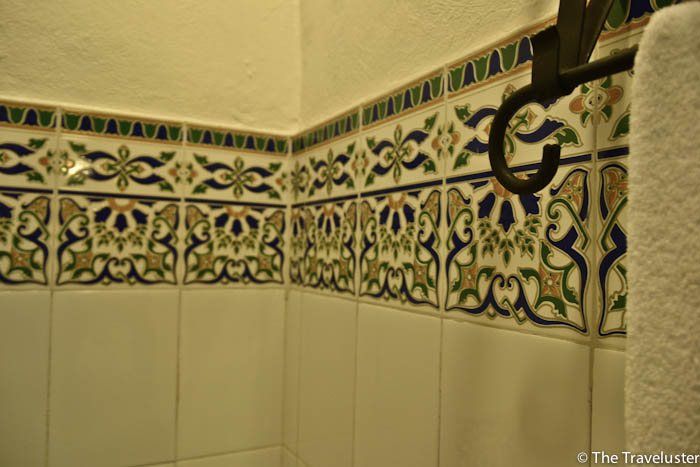 I love the Spanish tile detail in the bathroom. 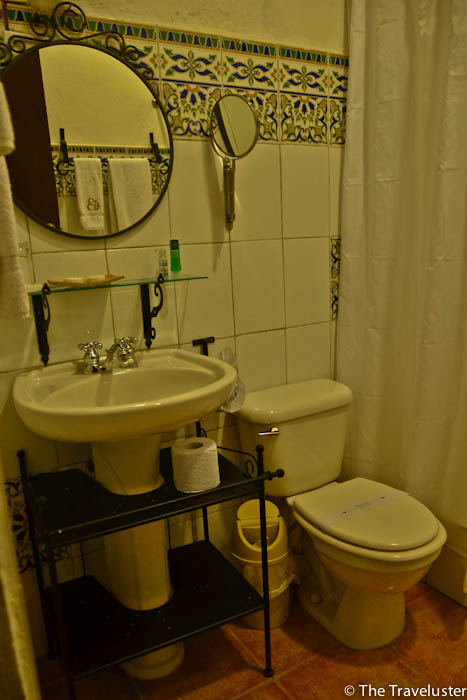 All of the rooms surround the beautiful Spanish courtyard.

Location: As I mentioned, location is key. El Beaterio is located smack, dab in the center of the Colonial Zone right in front of Parque Duarte at the corner of Calle El Duarte and Calle Padre Billini. It’s two blocks from Calle Conde, the main pedestrian street, and three blocks from the oldest functioning cathedral in the Americas. Pretty cool. 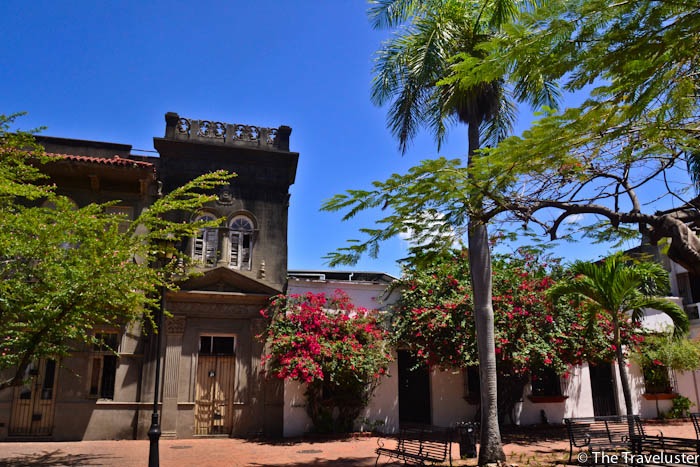 Cons? I can’t really point to many negatives about El Beaterio. It’s so quiet and the staff so un-intrusive that at times, you feel like you are alone in your own home. Some visiting foreigners may want a bit more hand-holding from staff (i.e. “Can I help you with any plans today or finding anything in particular?” etc.) For me, it was perfect, as I prefer to figure out a new place on my own and to be bothered as little as possible.

History. Once the home of widow Doña Maria of Araña, she bequeathed the house as a Beaterio in 1556 upon her return to Spain. Beaterio, in Spanish, means a house inhabited by pious women. When other feminine religious orders emerged, the Beaterio became obsolete and eventually was transformed in to a school, which it remained until the 1980’s.

El Beaterio is one of those places….

that I imagined returning to visit as soon as I arrived. At the end of my time in the Dominican Republic, when I circled back to Santo Domingo, I started thinking of all the places I missed on the island and wanted to check out in the future. I know that if I come through Santo Domingo again, I will definitely plan to stay at El Beaterio, the antique oasis in Zona Colonial.

For more information on Zona Colonial, check out my post on the city’s best walking tour.

Disclosure: El Beaterio provided me with a discounted media rate during my stay, which was applied only after I checked out (i.e. I didn’t realize that I wouldn’t pay full price until the end of my stay). I would have stayed at the hotel and written this review, as is, regardless. All opinions written here are completely and entirely my own. 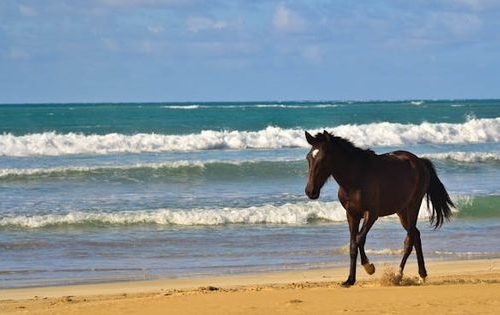 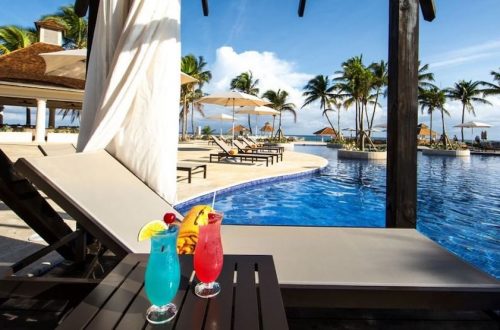 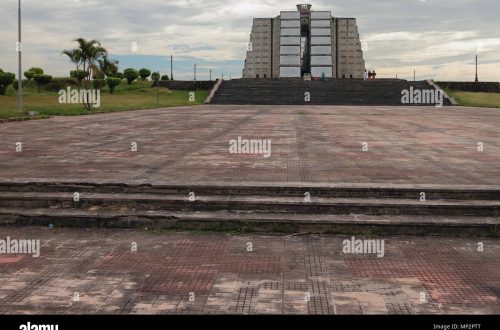