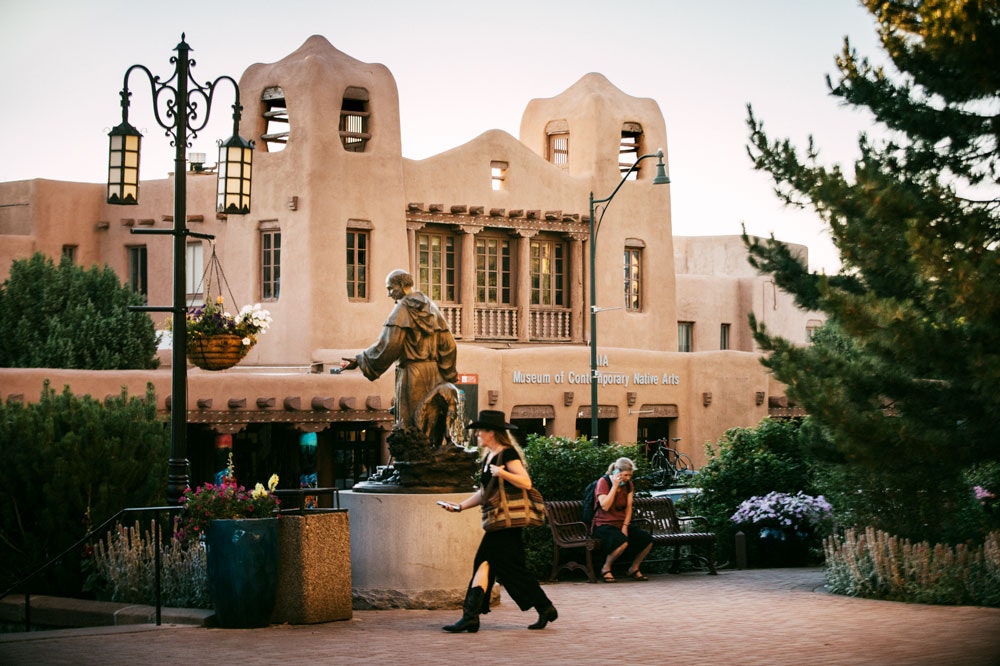 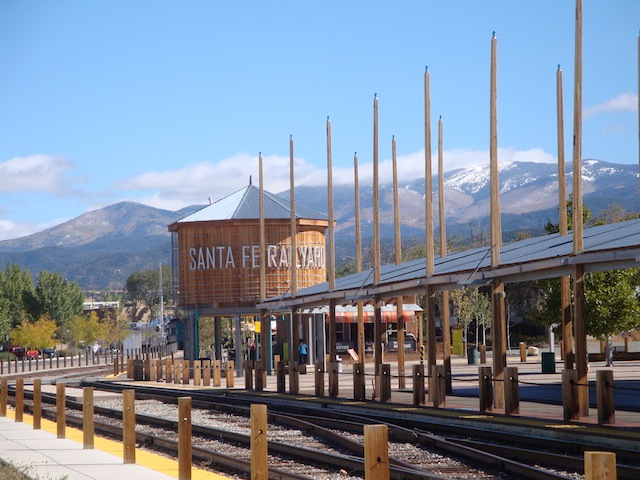 What’s the best way to explore a city that is one part Native American, one part Mexican, another part American, and a touch of hippie thrown in? Dive right in and explore the unique culture that makes up Santa Fe, N.M.

Santa Fe is a destination that has something for every kind of traveler. Love the outdoors? Santa Fe has several hiking opportunities, mountain biking, and snow skiing opportunities in the mountains above the city. Does food and drink dictate where you travel? The city has numerous restaurants with their own special twist on New Mexican cuisine. And there are several local breweries and even New Mexican wineries with quality products to taste.

How about art and history? Santa Fe has enough museums that focus on Southwestern art and Native American culture to keep a visitor busy for weeks.

There are plenty of ways to discover the culture of New Mexico’s capital city. Here are my five ways to experience Santa Fe. 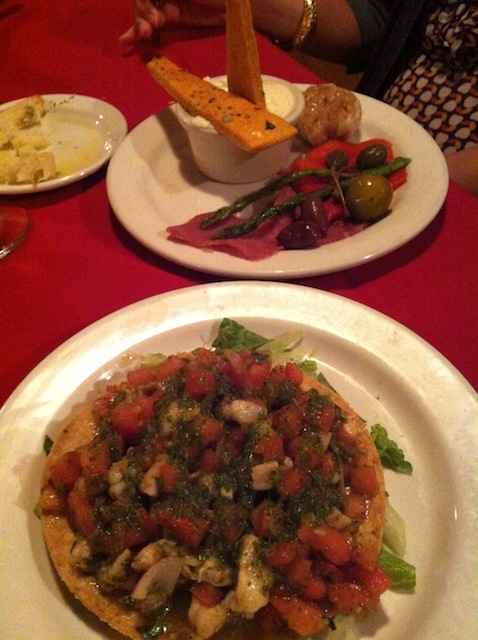 Some of the great tapas at El Farol on Canyon Road.

The only question you need to know when it comes to New Mexican cuisine is “red or green.” Red and green chiles are part of virtually every menu item in New Mexico, or at least that’s the way it seems.

Traditional New Mexican food hits the spot, especially if spicy is your game. Even the “mild” green chile has a nice kick to it. If you’re unsure which chile to go with, ask for Christmas (both). Receiving an order of chile rellenos or enchiladas smothered in red or green chile sauce is a monumental foodie experience.

Some of our favorites are Maria’s New Mexican Kitchen (also known for its list of 200 margaritas), Tia Sophia’s and La Choza. And so you don’t think Santa Fe is all New Mexican cuisine, the tapas restaurant El Farol on Canyon Road is an institution. And New Mexico has several breweries that hit the spot for beer lovers. My favorite was Santa Fe Brewing Co. 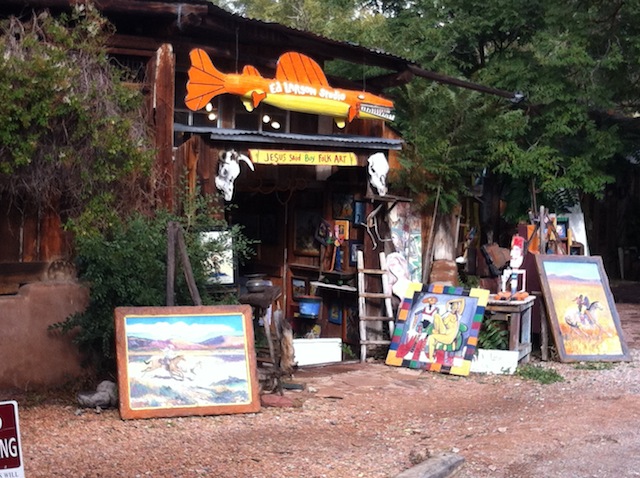 Santa Fe is an art-lover’s destination, and it’s easy to understand why after seeing the surrounding landscapes that mix desert to the south and west with the mountains to the north. Made famous by legendary American artist Georgia O’Keeffe, Santa Fe today is home to several quality museums, including O’Keeffe’s namesake that has rotating exhibits of her work from its vast permanent collection.

Art is what originally brought us to New Mexico, and it didn’t disappoint. We started with the Georgia O’Keeffe Museum, but just as impressive was the New Mexico Museum of Art, home to numerous works from some of the state’s great artists, including those who were part of the Taos Society of the early 1900s.

If you’re in the market to bring a piece of art home, Santa Fe’s Canyon Road has plenty of choices. Located just east of the city’s historic district, Canyon Road is said to have the highest concentration of art galleries of any street in the United States. The galleries are also welcoming, even though the price tags aren’t always at an entry level. Look hard enough, though, and there will be an affordable find or two. 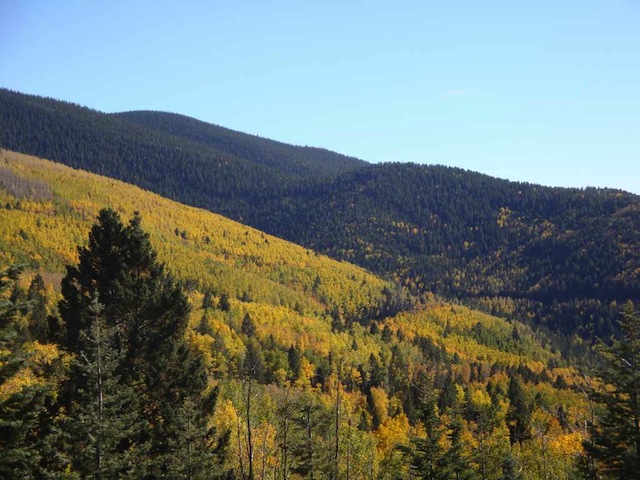 Santa Fe sits 7,200 feet above sea level in the Sangre de Cristo Mountains. The city has several biking and running trails, but drive just a couple of miles north of the historic Plaza to discover real trail adventures.

The easiest way to get into the outdoors in Santa Fe is to drive up the mountain toward the ski resort known as Ski Santa Fe. Along the way, there are numerous trails of various skill levels, a state park, and too many beautiful scenic lookouts to count along the 15-mile journey.

I’m sure the drive is beautiful any time of the year, but especially during the fall, it provides so many picturesque moments.

The 10-mile-long Aspen Vista Trail is 13 miles up the mountain, and has a moderate degree of difficulty. It’s also the most popular trail in the Sangre de Cristo Mountains, and is great for walkers or skiers.

Closer to Santa Fe is the Chamisa Trail, an easy 4.75-mile roundtrip trail that gradually climbs from 7,800 feet to 8,500 feet. It’s six miles north of town, and turned out to be the perfect outing for my 6-year-old son and I. Check out this site for listing of area trails. 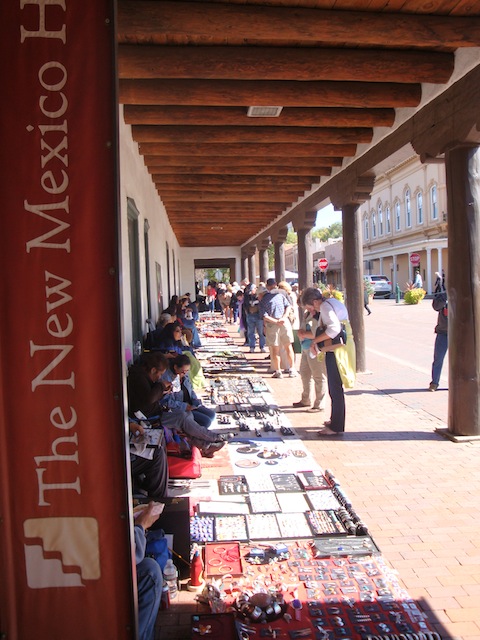 Santa Fe is the capital of New Mexico, but long before statehood, the city was the heart of northern Mexico. The Palace of the Governors, an adobe structure on the Santa Fe Plaza, was built in 1610 and served as a seat of government under numerous flags until being established as the Museum of New Mexico in 1909.

The state has an interesting history, from the region’s Native American culture, and Spanish and Mexican control, to the old Santa Fe Trail, and the more recent atomic history. Much of that history can be discovered at the museum, which relocated to a new building adjacent to the Palace in 2009. 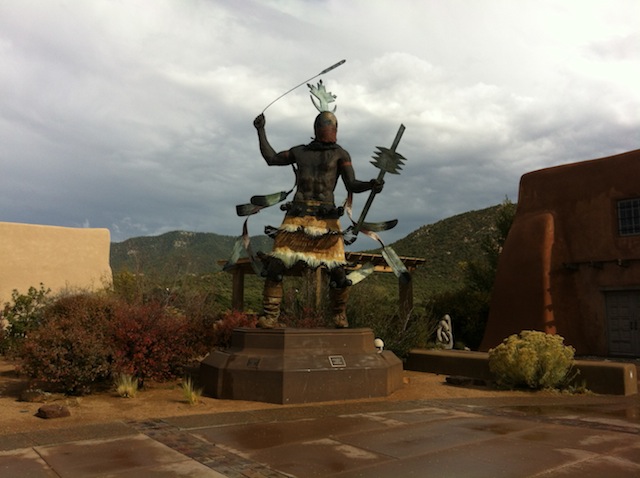 The Museum of Indian Arts and Culture sits on Santa Fe’s Museum Hill.

Driving north toward Santa Fe from Albuquerque along Interstate 25, the state’s Native American culture is evident. The region is still populated by numerous Native peoples, and the highway passes through several reservations. About an hour north of Santa Fe is the wonderful Taos Pueblo people.

There are several ways to learn more about the state’s rich Native American culture in Santa Fe. For us, it started in the city’s Museum Hill area just off the Old Santa Fe Trail. That’s where we visited the Museum of Indian Arts and Culture. The neighborhood is also home to the Wheelwright Museum of the American Indian, the Museum of International Folk Art and the Museum of Spanish Colonial Art.

And around the historic Plaza are the Museum of Contemporary Native Arts and the Pablita Velarde Museum of Indian Women in the Arts. Also consider buying jewelry and art made by local Native Americans, who are set up under the portal of the Palace of the Governors as part of the Native American Vendors Program.

Lance Wiedower is the editor and publisher of Trips By Lance, a site that provides inspiration for independent travel and cultural experiences for families and couples, whether it’s halfway around the world or close to home. Lance wants to help travelers experience destinations in a meaningful way without having to break the bank or spend all their vacation time to do so.

Lance lives in Memphis, where he and his family regularly experience all the great fun the birthplace of rock ‘n’ roll has to offer. But they enjoy traveling to other great cities, whether on the West Coast, East Coast, one of the South’s great foodie scenes, or the cultural capitals of Europe. 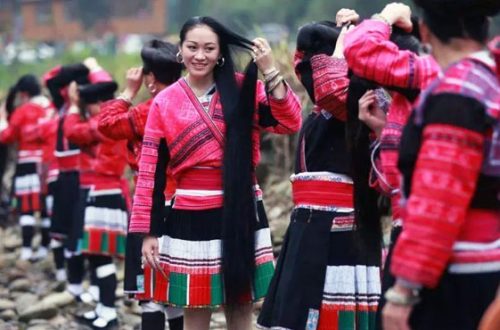 A Tour of the Huangluo Yao Village 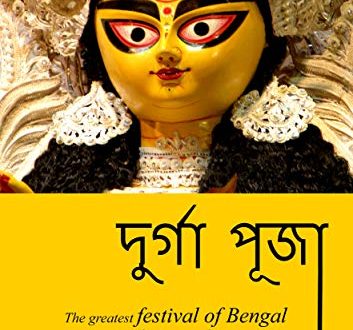